Ken Milano the Local Historian: "From History Buff to Historian" 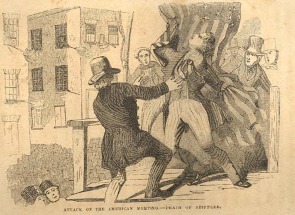 Kenneth W. Milano was born and raised in Kensington. He comes from a long line of German Catholics that settled in the Kensington and Fishtown neighborhoods. Milano grew up as a self-described, "knuckle-head," playing ball in the street and using the I-95 construction site as a city-wide playground in the 1970's. After leaving a job at the Philadelphia Naval Shipyard, he went to college and graduated from Temple with a degree in history. Milano worked for William H. Allen Booksellers for several years before joining Michael Brown Rare Books in West Philadelphia.

But Milano's passion resides in his Kensington stomping grounds. As a local historian, Milano has helped recover and document many facets of Kensington and Fishtown's history--a history that he believes is under-studied by most scholars in academia. He has published a history column in the Fishtown Star since February 2004, an online encyclopedia of Kensington history, and several books. Often working with Torben Jenks and Rich Remer, two other local historians, Milano has laid the groundwork for future generations of Kensington and Fishtown researchers.