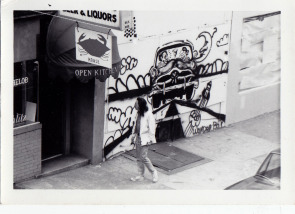 In 1969, a wandering young architect named Joel Spivak was passing through Philadelphia. He was working on a short-term project: building a gallery for a couple named Snyderman. Upon arriving on South Street, Joel noticed that a few artists around the somewhat desolate neighborhood were fixing up buildings, and opening stores and restaurants. Stumbling upon an apartment at 324 South Street with a price tag of $25 a month, and realizing that he could make that in an afternoon, Spivak decided to stay for a while. That was forty years ago. Joel still lives in South Philadelphia and is an integral part of the art community in the neighborhood and citywide. One of the founding members of The Dumpster Divers, Joel has had a great deal to do with the formation of the new gallery at 734 South Street, and continues work on collaborations with many artists. An enthusiastic photographer in the 1970’s, Joel also has a comprehensive collection of photographs that spin an array of yarns from South Street’s transitional years.

“We described the intersection of 4th and South Street as the center of the universe. So much happened on that corner,” Joel explains. Today this corner of South Street paints a pretty clear picture of the street’s character in 2009. On one corner is the famous Jim’s Steaks, an institution for almost 40 years. Across 4th street is the Copabanana, the only remaining restaurant of the Renaissance. Directly across from the Copabanana is a Starbuck’s, which, Joel laments, was once Café Yaaz, a cozy Lebanese eatery that hosted many a gathering of South Street’s early denizens.

South Street has gone through numerous transitions even since the “new age types” arrived in the 60’s and 70’s. “A lot of buildings have changed since I’ve been here,” explains Joel Spivak, “they’ve been re-gentrified.” In 2009 Spivak is living through yet another transition.