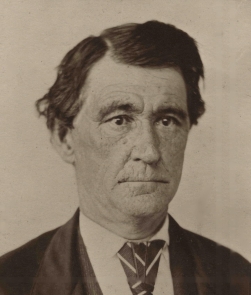 My great-great-great grandmother, Eleanor or Ellen, and her young son Dennis arrived in Philadelphia, Pennsylvania, in 1834 coming from Barnsley, England. Ellen's husband, also Dennis, was a sailor and was "lost at sea" according to family history. Ellen and her late husband had both been born in Ireland.

Dennis Donoghue (1820-1889) served his apprenticeship at the tinner’s trade in Philadelphia and then found an Irish bride when he was but 21 and she 19. They were to spend the next 48 years together raising eight children and numerous grandchildren.

On November 12, 1841, in the Methodist Church Dennis Donoghue married Jane Sergeson. Jane was born in 1823 in Banbridge, County Down, Ireland, the sixth of nine children of Robert and Elizabeth Sergeson, both natives of Ireland, who all immigrated to America in 1837. Robert was engaged in the manufacture of shuttles in Philadelphia and had sons who carried on the trade after him almost to the 20th century. I believe, but have not researched it yet, that if you scratched the Sergesons, you would find Scots-Irish who had already emigrated to Ireland from native Scotland. That may be a story for another day.

Dennis Donoghue carried on the tinner’s trade in the Kensington section of Philadelphia from about 1841 until the late 1850s. McElroy’s Philadelphia Directory shows Dennis Donohue, tinsmith, at 123 Green St. in 1843; at 324 N. 2nd St. in 1845, and at 552 North 2nd St. in 1846 through 1852. Tinsmiths created gutters, lighting accessories, stoves, roofs, and many other tin wares used in the household.