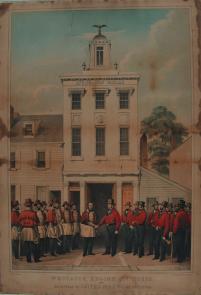 In the 19th century, the engine house was the center of social life for working-class men in the area. Membership in a fire company granted men social status, authority, and legitimacy within their own neighborhoods and ethnic groups. There were seven fire companies in Southwark; the brigades were volunteer, and their members drawn from and aligned with competing ethnic and political groups. Companies of Irish Democrats or Nativist Republicans often operated like street gangs competing for turf — and in this case, the "turf" was burning buildings. The clubhouse atmosphere and ethnic and political antipathies often led to rival companies fighting at the scene of the blaze, causing more harm than good as the structures burned down.

Founded in 1800, this house, Weccacoe Engine, spawned a splinter "Weccacoe Hose" in 1842 after an ethnically tinged rift occurred within Weccacoe Engine over temperance. The Irishmen felt targeted and alienated by the temperance movement, which they perceived as thinly veiled anti-Irish sentiment. The break-away Weccacoe Hose Company at Front and Catharine streets was aligned with the Democratic Party and anti-temperance, while the Engine Company remained Republican and pro-temperance.

Since volunteer firehouses in both Southwark and adjacent Moyamensing were considered more of a social problem than a public good, many companies tried to counter this image with parades and professions of loyalty to neighborhoods. The informal, disorganized and sometimes violent nature of the fire companies was one factor leading to the incorporation of the industrial suburbs of Philadelphia (including Southwark, Moyamensing and Northern Liberties) into the city itself in 1854, and the subsequent creation of municipal police and fire companies.