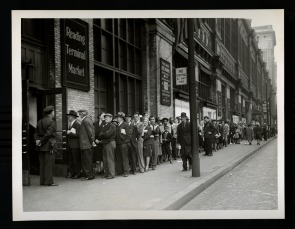 The Reading Terminal Market has served the greater Philadelphia region for over 120 years. The enclosed public market, located at 12th and Arch, offers a variety of food and merchandise ranging from many different cultures. The market's birth came in part with the grand construction of The Reading Terminal in 1892.

The Philadelphia and Reading Railroad Company wanted to consolidate its four Philadelphia terminals into one large downtown station. This then lead the company to purchase the 1110 block of Market Street with hopes of becoming a leading provider of transportation in the Philadelphia region . The Terminal in its original form consisted of three parts. These three parts included the train shed, the head house, and the market. Once completed after some financial difficulties, the Terminal opened for business. Previous markets on the 10th and 11th blocks of Market Street joined into one larger basement market located below the new train station.

The Reading Terminal in its hay day transported thousands of people in and out of the center city district. It also served as an inner city rail connecting passengers to different areas of the city. The market’s prime location underneath the heavily traffic Train Shed determined its popularity and success. Many commuters and local Philadelphians could grab a bit to eat, as well as shop the markets unprepared grocery sections. During the height of popular train travel in the mid 1930’s, many of the market vendors offered delivery systems. According to David K. O’Neil in Reading Terminal Market: an illustrated history, “much of the early business at the market was called in and sent out in baskets” . At one point, “the market had 400 phone lines to take call-in orders.” The rail lines served as a delivery system that reached many surrounding suburbs. This ordering system helped geographically grow the popularity and business of the market.

During some of the hardest times in American history, the market offered the Philadelphia community resources not readily available. During the Great Depression, regional farmers increasingly started to become the main food suppliers for the market. The Reading Terminal Market’s website explains that “the Reading Terminal Market demonstrated the importance of a regional food supply. Compared to other retail businesses, the Market prospered during the Great Depression . . . [these] local farmers were eager to bring their merchandise to a city where supply was scarce and prices were good.” This regional food supply created a beneficial network for all parties involved. Later during World War II, the market’s regional food supply once again benefited the city of Philadelphia. “. . . When large-scale farmers redirected food production to the war effort, small local farmers sold their goods at the Market”. Although rationing was still in effect, market patrons still had the opportunities to buy highly sought after items like meat and dairy.

The market, after decades of prosperity fell, on hard times after War World II. Lifestyle changes dramatically affected the markets success. Also new government safety regulations raised the cost of operation for the merchants. At this time, supermarkets came into popularity because of the convenience, something for which the market once prized itself. As train travel decreased, the Reading Company eventually was forced into declaring bankruptcy. With no money to invest into the market’s upkeep, the market was leased out to a real estate spectator who dramatically increased rent prices. This change drove out 30 of the remaining 56 merchants .

In the early 1980s, the Reading Company was able to emerge from bankruptcy and buy out of the lease agreement. The new management reinvested in the market. The commercial district in center city at this time also began to breathe new life. As consumer culture shifted away from homogenized supermarkets, the market created an environment for foodie culture to thrive. Steadily the market picked up steam and more vendors occupied stalls. In the midst of this renewal, the train shed stopped operating. SEPTA (the Southeastern Pennsylvania Transportation Authority ) chose to reroute its city commuter line past the station. It was an end of an era; no more trains would past above the market. Instead, this gave new opportunities for the use of the terminal.

The Pennsylvania Convention Center Authority was created and became in charge of renovating the train terminal into the city’s new convention center. After some delays, the project began, but not without protest from market goers. Philadelphians wanted to ensure that their beloved market would stay true to its history. During construction, however, the original terminal’s foundation needed to be strengthened. Project manager Bill Gardiner was able compromise between both sides of the argument. The construction of the new convention center was successful and only little original architectural integrity was lost. Today the market remains a staple in Philadelphian culture. Now connected to the Convention Center, its accessibility and reputation continue to instill its place within the Philadelphia community.