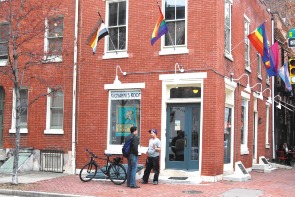 Founded in 1973 in the 200 block of South Street, Giovanni’s Room is the oldest gay and lesbian bookstore in the country as of 2014. The name comes from James Baldwin’s Giovanni’s Room, one of the very few gay novels at the time. Located on the corner of 12th and Pine Streets, Giovanni’s Room now has 7,000 titles on the shelves and its website, www.queerbooks.com, offers 5 million books and 3.5 million ebooks. Giovanni’s Room also advertises the lore of Walt Whitman’s kiss: if you can get a staff member to kiss you, you will be in direct succession of a kiss which was transferred from Whitman to Edward Carpenter to E.M. Forster to Allen Ginsberg to Bern Boyle, one of the founders of Giovanni’s Room.

The current owner is Ed Hermance (73). Hermance had a degree in comparative literature, was teaching in colleges and working on his Ph.D., when he realized that he would never get out of the proverbial closet if he stayed in teaching. So he dropped out and moved to Colorado to join a commune. He then moved to San Francisco, on to Germany where he taught English at an American college and at Tuebingen University, and finally, in 1971, to Philadelphia where he managed Ecology Food Co-op in West Philadelphia. In 1974 Hermance met Bern Boyle, one of the founders of Giovanni’s Room and a member of the Gay Alternative, a gay literary collective. Hermance went to a meeting of the Gay Alternative and soon became the treasurer. He also became treasurer of the new gay community center.

Giovanni’s Room was put up for sale in 1976, and Ed and his friend Arleen Olshan bought the store and moved it to 1426 Spruce Street. Coincidentally, gay book culture began to grow and enough books became available that the store could become a success. The store was thrown out of the Spruce Street location because of a homophobic landlord. Part of the identity of the store was to be “out”, so it had always clearly gay window displays on a major street. A number of realtors refused to rent a store front on a major street, though they would rent space on a back street, so the store would be as invisible as the gay bars back in those days. Arleen and Ed hadn’t thought of buying a space because they didn’t have any money. But as the eviction date drew ever closer, they borrowed the down payment from customers and bought 345 South 12th Street. More than 100 volunteers helped renovate the space. Eventually the store expanded into the building next door.

In an interview for 34th Street Magazine, Hermance said the main purpose of Giovanni’s Room originally was to “accumulate what you could find in one place so people didn’t feel so bare. It was like we didn’t really have any culture.” As gay culture blossomed and became more visible, Giovanni’s Room became a social and cultural hub. It provided information on sexual health and became a support system during the AIDS crisis in the 1980s, a time when no government at any level would provide safe sex information for fear of being accused of promoting homosexuality. As a small business with a focus on community, Giovanni’s Room still provides a social venue for people to come together and meet based on common interests.

In the early 1980s to mid-1990s, Giovanni’s Room was the principal, maybe only, wholesaler of American gay, lesbian, and feminist books to stores in Western Europe, Australia, and New Zealand. A Vatican library bought a copy of Lesbian Nuns: Breaking Silence, edited by Rosemary Curb (Tallahassee: Naiad Press, 1984). The LGBT stores in London, Berlin, and Vienna all have acknowledged Giovanni’s Room as an important resource in their early days.

In July 2011, it was discovered that the building’s front wall was in danger of collapsing and the repair fees put Giovanni’s Room in a difficult position. The Philadelphia gay community rallied behind the store and raised the $50,000 to pay for the wall. The store is on the cusp of change. Either a new owner will make the store bigger and better or it will be sold, with the proceeds going to the Delaware Valley Legacy Fund.

There is a Pennsylvania Historical and Museum Commission’s marker in front of the store at its 12th and Pine location.