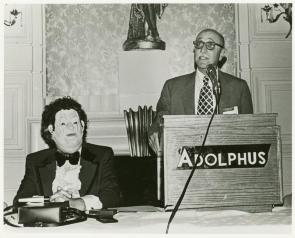 At the 1972 American Psychiatric Association meeting in Dallas, Texas, a man wearing a mask took center stage and changed history with eight words: "I am a homosexual. I am a psychiatrist." The man, who did not reveal himself until the 1994 APA conference in Philadelphia, was Dr. John E. Fryer.

Fryer was born in Kentucky in 1938. He graduated from high school at 15, from college at 19, and attended Vanderbilt University's School of Medicine. Fryer became Professor of Psychiatric Medicine at Temple University and saw patients there. He also saw patients at Friends Hospital and at his private practice in Germantown. He focused on drug and alcohol dependence, death and bereavement, and the needs of patients with AIDS. He was also the organist and choirmaster at St. Peter's Episcopal Church in Germantown for over 30 years. It was during his time at Temple University that he made his landmark speech in Dallas.

Since the 1950s and 60s, the APA's Diagnostics and Statistics Manual (DSM) classified homosexuality as an illness. In the early 1970s, LGBT activists Barbara Gittings, Kay Lahusen, and Frank Kameny worked tirelessly toward removing homosexuality as a mental illness from the DSM. The APA invited them, along with a panel of two psychiatrists, to make a presentation at the 1972 meeting to educate the APA about homosexuality. They decided that having a psychiatrist who was gay speak out would be the most convincing way to accomplish this. They recruited Fryer, who agreed on the condition that he could wear a disguise and distort his voice. Frank Kameny believed that wearing a mask went against the point of having gay people be open and visible, but Kay Lahusen and Barbara Gittings knew it was a necessary compromise. Fryer was not yet tenured at Temple and did not want to risk losing his career if he revealed himself publicly as gay. At the conference he called himself Dr. Henry Anonymous and he spoke of the difficulties of practicing in a field that diagnosed him as mentally ill, the fear of losing his career, and the importance of recognizing that homosexuality is not an illness. His testimony was crucial in getting homosexuality removed as a mental illness, in increasing the visibility of gay people within psychiatry, and in getting people to stop talking "about" gay people and start talking "with" them.

After his speech at the APA meeting, Fryer wrote in his diary: "The day has passed - it has come and gone and I am still alive. For the first time, I have identified with a force which is akin to my selfhood...I hope that the effort does not die." The APA completely removed homosexuality from the DSM in the late 1980s. In 2002 The Association of Gay and Lesbian Psychiatrists honored Fryer with the Distinguished Service Award for his major contributions to the LGBT community. Every year, the APA gives out the John E. Fryer Award for contributions toward the mental health of LGBT people. The award is a $1,000 honorarium.