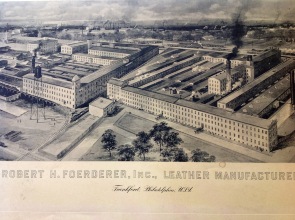 Robert Foerderer was one individual who contributed to Philadelphia’s reputation as the Workshop of the World in the late 1800s and early 1900s. Born in Prussia, Germany in 1896, Foerderer moved to the United States with his parents when he was a young boy. Generations of his ancestors worked in the leather industry before him, and Foerderer followed their example.

Determined to become successful, Foerderer spent years experimenting to improve the tanning process, or treating animal skins to produce leather. Finally, he discovered that treating animal skins with the chemical chromium sulfate created the softest and most supple leather in existence. The product worked especially well for making leather shoes and handbags.

Foerderer’s company, Robert H. Foerderer, Inc., began as a one-room factory located at Wheatsheaf and Coral Street in the Frankford section of the city. In 1892, Foerderer built a large plant at the site, which eventually covered seventeen acres. Foerderer strategically placed the plant adjacent to railroad tracks, which made the delivery of animal hides cheaper and more efficient. Many of Foerderer’s factory employees, frequently German immigrants themselves, lived on the blocks of two-story row homes that surrounded the plant. One street near the factory site was called Vici Street after Foerderer’s famous leather and still existed as of 2013.

Foerderer entered Vici Kid in a competition at the 1893 Chicago World’s Fair. His product competed against other leather products from around the world. Judges awarded Vici Kid the grand prize and gold metal. This event displayed Vici Kid to the world and created a large market for the product.

Robert Foerderer did not live to see the full success of his company. He dies in 1903 at the age of forty-four. His son, Percival Foerderer was studying medicine at the University of Pennsylvania when his father became ill. Before his father died, Percival dropped out of Penn and started an entry level job at Robert H. Foerderer, Inc. Within two years, Percival worked his way up the ranks and became president of the company.

Robert H. Foerderer, Inc. thrived under Percival’s leadership. The factory in Frankford produced luxurious leather goods that fine department stores sold all around the nation. Foerderer’s company became known especially for their high quality, fashionable, and affordable shoes. Department stores placed advertisements for Vici Kid shoes in newspapers frequently from 1893 through the 1930s, but Vici Kid shoes proved most popular in the 1920s.

After much success, Percival closed the plant, dissolved Robert H. Foerderer, Inc., and retired around 1937. At some point in the mid-1900s, Robert Foerderer’s leather factory was demolished. As of the 2010s, a completely new structure existed on the site.