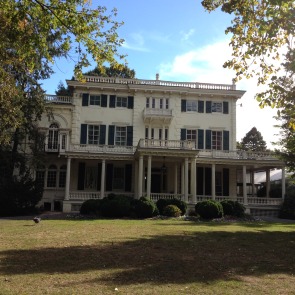 Hidden in a residential neighborhood in the village of Torresdale in Northeast Philadelphia remains the only waterfront estate in Philadelphia open to the public: Glen Foerd. Made up of almost eighteen acres and situated on the banks of the Delaware River and Poquessing Creek, the grounds of Glen Foerd are open for the public to enjoy seven days a week from dawn to dusk. While walking along the river, listening to birds chirp and feeling the breeze on your face, you may notice a life-size statue of a black dog named Little Ugly. The strange statue was built to honor the beloved Newfoundland of Charles Macalester, the first owner of Glen Foerd. Little Ugly stands as a reminder of the home’s long and quirky history.

In 1850, businessman and broker Charles Macalester built a three-story summerhouse on his land on the banks of the Delaware River. He called the home Glengarry after his family home in Scotland. A friend and adviser to eight presidents from Andrew Jackson to Ulysses S. Grant, Macalester and his family shared their time between Washington, DC—their home there became the Russian Embassy when they sold it—and two locations in Philadelphia. The area surrounding Glengarry was a popular resort destination during the late 1800s. The Macalester family used Glengarry exclusively as a vacation home and entertained many Washington diplomats here. After Charles’s death in 1850, his daughter Eliza “Lily” Macalester Laughton maintained the residence until her death in 1891.

In 1893, Robert Foerderer purchased the estate and chose to rename it Glen Foerd, taking half of the original name Glengarry and half of his family name. In the beginning of the 20th century, the Foerderers completed massive renovations that almost doubled the size of the house. Over the course of several years, contractors added a large dining room, art gallery, kitchen, and servants’ quarters. Other additions included a grand staircase, self-playing Haskell organ, leaded glass skylights, and decorative woodwork. These details remain strikingly visible to visitors today.

Robert Foerderer became successful in the leather industry. His business, Robert H. Foerderer, Inc., was located in the Frankford section of the city. Foerderer also served as a United States Congressman and President of Keystone Telephone, Co. Unfortunately, Foerderer died in 1902 before the completion of Glen Foerd. His wife Caroline, son Percival, and daughter Florence called Glen Foerd home after Robert’s death. Percival Foerderer became president of Robert H. Foerderer, Inc. after the death of his father and moved to Bryn Mawr, PA. Both Caroline and Florence lived at Glen Foerd until their deaths in 1934 and 1972 respectively.

Caroline and Florence maintained Glen Foerd perfectly—with the help of a large staff of domestic workers. One of these workers, an African-American butler named Arthur Laws, handled the daily operations of the estate and managed the other workers for at least two decades until his death in the mid-1930s. Former employees and their families remembered both Caroline and Florence as caring and generous women.

Besides the mansion itself, the estate included impressive English-park style landscaping and magnificent rose gardens. Several structures besides the mansion existed on the estate. A gate house, carriage house and stables, water tower, Swiss chalet-style guest home, boat house, and small garden house Florence Foerderer Tonner converted to a play house for her children, are still standing today. The estate also functioned as a dairy farm, and Glen Foerd was often recognized for its award winning cattle.

Both Caroline and Florence avidly collected artwork, books, glassware, china, and antiques. At the time of Florence’s death in 1972, when she willed the mansion to the Lutheran Church, the house was crowded with valuable items. At the turn of the 2000s, much of their collection remains in the house, although because the mansion is rented for large functions such as weddings, only a fraction of the pieces are viewable to the public to ensure the safety of the collection.