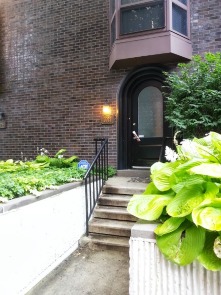 In the spring of 1934, three colleagues of the half-constructed Carl Mackley Houses met to join their forces of design expertise, scholarship, and union savvy and created a lobbying group self-tasked with organizing a workers’ housing movement. The architect of the group, Oscar Stonorov, provided this new labor-housing trio with a workspace at his and partner Alfred Kastner’s offices at 2021 Chancellor Street.

Stonorov and company, Hosiery Worker’s Union secretary John Edelman and planner Catherine Bauer, took their idea to the annual convention of the Pennsylvania Federation of Labor, held in Philadelphia on May 8, 1934. There, the Labor Housing Conference (LHC) was formally established. Soon after, Philadelphia Building Trades Council president James McDevitt joined the LHC’s founding team of three.

Catherine Bauer promoted the work of the LHC up and down the East Coast and throughout the Midwest with three educational speaking tours. She gathered support from labor leaders, stressing the necessity of organized labor leading the charge for comprehensive housing reform. These efforts produced seventy-five local labor housing committees representing both the Leftist craft trades unions of the Northeast as well as those from the more conservative, American Federation of Labor (AFL)-aligned building trades groups in the Midwest.

Although still in its infancy, the LHC pushed hard for an endorsement from the AFL at its annual conference in October of 1934. The AFL had been wary of throwing their weight behind progressive craft trades unions (knowing that the LHC had been born out of work with the radical, Philadelphia-based American Federation of Full-Fashioned Hosiery Workers). However, the LHC’s cross-country campaign had won it considerable support from powerful building trades unions with influence over the AFL’s lobbying agenda. The following year at the AFL conference in Atlantic City, the LHC received the endorsement; they were also able to get passed a robust American Federation of Labor housing resolution.

The Labor Housing Conference only remained in Philadelphia for about a year and a half from its founding in May 1934. In October of 1935, the group received the AFL’s endorsement and shortly after moved to Washington, DC. There, it built directly on strengthening the coalitions of labor housing committees first organized during the group’s time on Chancellor Street. The LHC worked to transform this base of support into a powerful labor-housing lobby which would pressure Congress and the Roosevelt Administration to pass a public housing bill with strong provisions for labor housing.