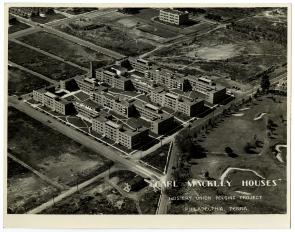 In the early 1930s, the North Philadelphia landscape of Juniata Park was dotted with textile mills and smokestacks and home to a public golf course. There was, however, a lack of affordable housing for the working masses fighting their way through the depths of the Depression. A progressive local union, The American Federation of Full-Fashioned Hosiery Workers, saw the need. They hired John Edelman as union secretary and Head of Research to help remedy the problem by building the Carl Mackley Houses (CMH) at 1401 E. Bristol Street.

The story of CMH represents a vibrant intersection of history and policy where the Philadelphia labor movement and New Deal programs, modern architecture and federal housing politics, and one union housing complex and the burgeoning national public housing movement all meet. Edelman assembled a crack team to build ‘The Mackley’; on the ground were architects Oscar Stonorov and Alfred Kastner, Quaker philanthropist and future apartment manager William Jeanes, and housing activist Catherine Bauer. In Washington, Robert Kohn as head of the Public Works Administration’s Housing Division also served as an ally.

Opened January 1, 1935, the 284-unit apartment complex was named for 22 year-old hosiery worker Carl Mackley. He was killed by non-union laborers during a 1930 strike at the H.C. Aberle and Company factory. This history was featured in the CMH community building through three murals depicting the struggles of factory life, the martyred Carl Mackley, and triumphs of the labor movement.

CMH’s four handsome 3-story apartment buildings were built on a three-acre block framed by Castor Avenue, Bristol, M, and Cayuga Streets. A series of conjoining rectangles made up each of the four waved buildings. They were dressed in various shades of light brick tile and arranged to mirror one another, framing landscaped courtyards with pedestrian throughways running in between.

The architecture, amenities, and arrangement of the newly built Mackley Houses represented a break from those of traditional low-income housing projects. The apartments were small and designed with few amenities; this made them cheaper to build and more affordable to rent. They were also intentionally built this way to push residents out into communal spaces. And CMH had many, including open-air rooftop laundries, underground garages, a pool and community building, grocer and daycare.

Starting in the late 1960s, CMH faced a generation of deterioration. They were bought and renamed the Greenway Court Apartments by a private developer in 1968. Years of cheap neglect and lagging capital investment finally gave way to the one-dollar purchase of the HUD-foreclosed complex by the Philadelphia Redevelopment Authority in the early 1990s.

Following this acquisition by the city, the complex underwent a $20+ million dollar renovation in 1999, financed in part by a loan from the AFLI-CIO’s Housing Investment Trust. The renovation included a restructuring of the complex’s 284 apartments into 184 units of considerably larger size and attendant amenities.

The original team behind The Mackley brought together a local union with federal funders for the purposes of building an affordable housing project for union workers. The Housing Investment Trust’s financing of the Carl Mackley Apartments renovation in 1999 showcased a national union financing the rehabilitation of a local affordable housing project for primarily non-union, low-moderate income individuals and families. This change illustrates an interesting reversal of the union role in The Mackley story over time.

With the late 90s renovation, The Mackley’s good name was restored to the Carl Mackley Apartments. As of 2013, the complex serves low-income seniors and families receiving Section 8 rental assistance.