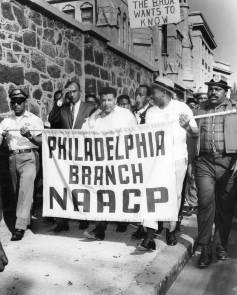 Philadelphia is often referred to as “the city of brotherly love.” However, during the mid-1900s, racial differences caused intense acts of discrimination and segregation. Cities all over the country segregated public and private schools. Before 1968, black students were not allowed to attend Girard College, at 21st Street and College Avenue near Girard Avenue. It, however, was the defendant in the first monumental victorious school desegregation case in Philadelphia’s history.

Girard College was established in 1833, under stipulation of Stephen Girard’s 1831 will. Girard was born 1750 in Bordeaux, France and was the first-born son to Pierre and Anne Girard. In May of 1776, Girard traveled into the port of Philadelphia in search of a better life. Girard became a successful businessman in trade and finance. After his death, he left the City of Philadelphia in charge of his estate and specifically instructed the city to build a school to educate “poor male white orphans.”

In 1849, Girard College was built and opened its doors to educate the less fortunate, with segregation justified by Girard’s wording. During the early 1900s, the number of African American residents in Philadelphia skyrocketed, surpassing the white population. The dramatic increase in population affected the social dynamic of the city, and black schools struggled to stay afloat. Girard College became a potential solution to reduce the excess number of students attending all-black schools in Philadelphia’s poor neighborhoods. However, the increase of black children living in Philadelphia in need of an educational opportunity did not bring an end to segregation; African-American students were prohibited from attending Girard College. Many black citizens and activists, including lawyer and City Councilman Raymond Pace Alexander claimed “Girard College symbolized white supremacy” by preserving the de jure segregation practices of school system in the South. Other civil rights attorney, including E. Washington Rholdes, attorney and editor of The Philadelphian Tribune, announced he would represent pro bono any black student rejected admission.

As lead attorney, Raymond Pace Alexander began pressuring Girard College to desegregate its facility. In February 1954, while awaiting the Brown v. Board of Education decision, Alexander filed the first lawsuit against the school. On May 17, 1954, the Supreme Court declared in the Brown v. Board of Education that “separate but equal” was unconstitutional. Supreme Court Justice Harlan stated that “in the eyes of the Constitution [and] law superiority dominates, and ruling class of citizens is non-existent.” Harlan strongly believed the American Constitution is “colorblind.” While the court announced desegregation of public schools would occur “with all deliberate speed,” Girard College as a private school resisted integration for years.

From 1954 to 1958, Alexander filed many more lawsuits against Girard College. The lawsuits were not very successful; the court rejected the request to integrate Girard College. As a result, the case was placed on the back-burner. However, by the 1960s, a new wave of civil rights leaders came onto the battlefield and demanded for greater progress on civil rights. As Alexander re-filed desegregation cases, civil rights leaders such as Cecil B. Moore, head of the Philadelphia chapter of the NAACP, believed in radical militant tactics to fight for civil rights and social equality. Thus, he organized non-stop marches and picketing campaigns alongside the walls of Girard College. Moore’s street protests and confrontational language offered a marked contrast to Alexander’s legislative approach to civil rights. However, Moore and Alexander shared one common goal - to desegregate Girard College and Philadelphia’s public school system. Thus, both men put their differences aside for the greater progress to desegregate the school.

The school’s inaction fueled Moore to organize another picketing campaign, and this time his direct action tactic pressured the courts to speed up the litigation process. In November 1966, Federal Court District Judge Joseph S. Lord told Girard College they could no longer deny African-American students from attending the school. The school board filed an appeal. When the case reached the U.S Supreme Court, it ruled in favor of Alexander. This decision “forced” Girard College to revise its admission policy. On May 20, 1968, the fifteen-year battle to desegregate Girard College finally can to a close when the U.S. Supreme Court declined to hear an appeal of a lower court ruling, thus paving the way for integration of Philadelphia’s schools. Girard’s board of trustees agreed to admit African-American students.