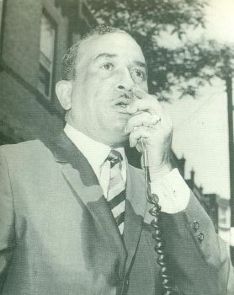 Cecil B. Moore was one of the most significant civil rights leaders in Philadelphia. His last residence was located at 1708 Jefferson Street. In 1974, Moore bought the house from Raymond Pace Alexander, the first African American judge in Philadelphia. Both Moore and Alexander played important roles during the civil rights movement within Philadelphia. However, Moore’s civil right campaigns and modern leadership style were more aggressive than the older generation of activists. During the mid-1960s, he was able to make a more personal connection within the black community than other civil rights leaders. His ability to connect was partly due to his streetwise attitude and, to help him gain support from the average minority community, his hard work to present an image as an ordinary man.

Despite appearances, however, Cecil Bassett Moore came from a middle class family. He was born in 1915 in West Virginia. Moore always valued his educational opportunities. His positive early educational experience motivated him to further his education. After high school, Moore attended Bluefield College. Following his graduation from college, he chose to enlist in the Marine Corps and serve overseas during World War II. By the end of his service, he had gained the rank of sergeant. His military experience had a huge impact on his leadership style during the civil rights movement in Philadelphia.

In 1948, Moore moved to Philadelphia and began studying law at Temple University. He attended Law School at night on his GI Bill. In addition, Moore worked in a liquor store to put himself through school. By 1953, Moore graduated from Temple with a law degree. He quickly established a reputation as an accomplished defense attorney. Through the years, Moore became involved in civil right cases and represented many black lower-class citizens. It became apparent that fighting civil rights issues solely through the court system was not making much headway. Moore became frustrated with the legislation process and believed direct action would be more effective. In addition, he criticized the older generation of NAACP advocates for failing to acknowledge issues affecting the working man and lower-class black community. Therefore, in 1962, Moore announced his candidacy for the position of NAACP president.

He took his campaign to the streets of Philadelphia and became the voice for the “working man.” Moore once told the public that he “was determined when I got back [from WWII] that what rights I didn’t have I was going to take, using every weapon in the arsenal of democracy.” His words turned into action when he began demanding equality within labor unions. He demanded better job opportunities, education and social programs for lower income black citizens. In 1963, Moore was elected NAACP president with the help and support from the residents of Philadelphia. His use of direct action tactics gave rise to the Black Power movement in Philadelphia. He believed that unity among members of the lower-class black community was most important element in achieving equality among the races.

In 1963, Moore began running a number of campaigns in favor of desegregating Philadelphia building trade unions. On May 11, 1963, Moore organized a picketing line at the new Municipal Services Building construction site. This campaign lasted several weeks. It was followed by a picketing campaign at a local school construction site in North Central Philadelphia. Moore kept this campaign going from June through July of 1963. In December 1963, Moore organized his final picketing campaign against the Trailways Bus Terminal. The picketers were protesting the company because they refused to hire black workers. Very few black workers were hired as a result of the 1963 labor union protests. Even though Moore’s efforts did not bring about major changes, Moore’s use of direct action protests did help to increase the number of black workers in Philadelphia.

The following year, an unforgettable race-related riot occurred on the night of August 28, 1964 on the streets of Columbia Avenue. As soon as Cecil B. Moore heard that a riot broke out, he rushed over to Columbia Avenue. Moore witnessed that people had already begun destroying property and setting fires. Though many NAACP members blamed Moore’s leadership style for contributing to the riots, he continued to use direct action protest. Moore’s policy led to the division of the NAACP organization into five parts.

In 1979, Cecil Bassett Moore, a dedicated lawyer, civil rights activist, president of the local NAACP, and member of the Philadelphia’s City Council, died from cardiac arrest at the age of 63. His legacy lives on all throughout Philadelphia. SEPTA transit dedicated the Cecil B. Moore train station located at 17th North Broad Street in Moore’s honor. In the spring of 1987, Philadelphia honored Cecil B. Moore accomplishment by re-naming a section of Columbia Avenue, between Front and 33rd Streets, as Cecil B. Moore Avenue. In addition, students gathered signatures for a petition to re-name the Columbia Avenue Branch neighborhood library to Cecil B. Moore Branch. The Cecil B. Moore Branch is a free library and has established the “Changing Lives” campaign which signifies Moore’s accomplishments throughout Philadelphia’s history. Moore will always be remembered for his rallies and pickets, especially, his picketing that effectively desegregated Girard College and his role in the 1964 riots in North Philadelphia