The Philadelphia Museum of Art 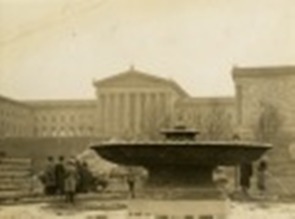 The founding of Philadelphia Museum of Art occurred during a time in Philadelphia’s history when the City’s driving force was the average factory worker. The average Philadelphian could come to the Art Museum in its early days and view an American’s idea of art, which included pottery, furniture, glass and tin. What they would not be able to see at this early art museum were works by European master artists. The exhibits at the Museum reflected what the average person could make with their own creativeness and their two hands. This vision of art is linked to the founding of the Museum.

Before the 1876 Centennial Exposition, a planning committee was formed of representatives from the Philadelphia City Council and the Pennsylvania General Assembly. This Commission, which was led by Representative Joseph R. Hawley, proposed the establishment of a permanent art museum in the Exposition’s Memorial Hall. In February 1876, it opened as the Pennsylvania Museum and School of Industrial Art with a charter from the state of Pennsylvania. The four thousand pieces of art, which had been displayed in Memorial Hall during the Exposition, became the beginning of the Art Museum’s collection. The Pennsylvania Museum was an art museum with a difference because its founders had the goal of training America’s craftsman in the industrial arts of making pottery, metalwork and glassmaking. The doors of the new art museum reopened exactly one year after the opening of the Centennial Fair.

During its early years, the Pennsylvania Museum and School of Industrial Art was managed by a Board of Trustees of twenty-two members. These officers included a President, two Vice Presidents, a Treasurer as well as a Curator. The museum’s first Curator, Dalton Dorr, performed multiple duties. Dorr acted as the first Director and Secretary of the museum. Dorr worked in these jobs to provide leadership for the board and staff as well as keep the financial records for the museum. Dorr’s work load was eased somewhat when William Platt Pepper was elected as Director in 1899. Dorr continued as curator and secretary until his death in 1901.

There were a number of gifts of pieces of artwork and financial contributions during this early period. In 1882, Mrs. Clara Bloomfield Moore provided an initial contribution to the museum’s collection in memory of her husband. The gift included paintings, antique furniture, costumes, jewelry and early books. In 1883, a group of women who were lead by Ben Franklin’s great- granddaughter, Elizabeth Gillespie, formed a committee that worked to provide contributions to the Museum’s collection. The Committee also contributed nearly thirty-thousand dollars towards supporting the School of Industrial Art. In 1893, the Museum trustees received another boost to its collection when Anna H. Wilstach left her American art collection to the Pennsylvania Museum. Wilstach’s estate also provided a half-million dollars to the Museum to purchase additional works of art. The new additions provided a surge in museum attendance as the public came to see the new Wilstach collection.

The School of Industrial Art was the subject of much acclaim during this period. The school was able to expand to accommodate more students after purchasing the former home of the Pennsylvania School for the Deaf at Broad and Pine. In 1897, the School also gained national recognition by playing host to the annual conference of the National Association of Manufacturers.

With the increase in museum attendance and expansion of its collection, Philadelphia’s City Council designated funds for the construction of a new building for the Art Museum in 1899. The planning and construction of the new facility took twenty-seven years due to revisions in the building plans by numerous architects and a lack of building materials during the First World War. The actual construction of the new Museum did not begin until July 1919 and continued for nine years. The new museum opened to the public on March 26, 1928. The new museum also had its official name shortened to the Philadelphia Museum of Art. The first exhibition at the new Fairmount location included paintings, sculpture, furniture and tapestry from France, Italy, England, the Netherlands and America.

A few years before the opening of the new building, the museum gained a new Director, Fiske Kimball. Kimball was a noted art and architectural historian who was instrumental in installing “period rooms” within the Philadelphia Museum of Art. Kimball believed that these “period rooms” allowed visitors to experience works of art within a contextual setting that included authentic furnishings and historic interiors. These rooms remain a distinctive feature of the museum to the present time.

The Museum continues to try to reach out to all Philadelphians. In March 1997, the Museum hosted over four-hundred young people at its first Korean Family Day. This celebration of Korean culture included a Korean dance performance, hands-on studio experiences, and guided tours. In that same year, The Korean Heritage Group was formed. This group supports the exhibition and acquisition of Korean art and the promotion of Korean culture in Philadelphia. The museum has also translated its exhibition guide book into several different languages, such as Spanish, Japanese, and Korea. These translations have helped secondary English speakers to enjoy the museum’s collections as well as English speaking visitors.

After the tragic events of September 11, 2001, the Philadelphia Museum of Art helped provide solace to the Philadelphia community by going ahead with a planned exhibition of the works of Thomas Eakins. The following year, the Museum offered free admission on the first anniversary in the hopes that the museum’s art could provide visitors with a place of reflection and assist with the healing process. The Philadelphia Museum of Art still remains a vital part of the museum community in Philadelphia through working with various other city agencies to restore and maintain the Benjamin Franklin Parkway. The Museum’s rich art collection now provides enjoyment for visitors from around the world as well as to the “average Philadelphian”.