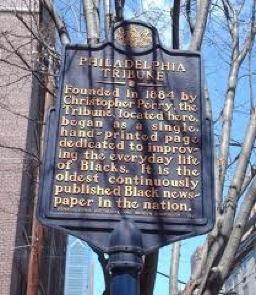 The Philadelphia Tribune located at 520 South 16 Street Philadelphia, Pennsylvania is one of many historic landmarks within the city. Since the birth of America the city of Philadelphia significantly shaped American society and culture. From the establishment of the Continental Congress that signed the Declaration of Independence to the temporary capital of the United States, Philadelphia became a central location for social equality and political activism. This gave rise to the establishment of many black businesses. Originally titled The Weekly Tribune is now know as The Philadelphia Tribune is the oldest surviving black newspaper in the country.

Christopher James Perry Jr., an African- American journalist and businessmen, was the founder of the Tribune. Perry was born on September 11, 1854 in Baltimore, Maryland. Christopher Perry was fortunate to attend public school. His family eventually moved to Philadelphia where he continued his education by attending night school in the city. He became passionate about journalism and wrote for the Philadelphia Sunday Mercury until the company went bankrupt in 1884. His love of journalism motivated him to establish his own newspaper. Perry successfully started his own newspaper called The Philadelphia Tribune on November 27th, 1884. Perry’s first issue was written by hand in a small office which was located at 725 Sansom Street in the city of Philadelphia.

At this time, it was very rare for an African American to start a business from scratch, especially a newspaper. Most public schools during the late 1800s were still segregated which made it very difficult for a black person to become educated. Even after Congress ratified the 14th Amendment and adopted the Civil Rights Act of 1875, the black community continued to experience discrimination and segregation all across the country, especially throughout the South. Thus, blacks had a very difficult time finding jobs. Philadelphia became highly racially diverse because Southern blacks migrated to the city in search of better jobs and education. Jobs became scarce in Philadelphia between the late 19th and early 20th century which was partly due to the population increase. According to a U.S. Census Reported, in 1880 the black population was 847,170 and by 1920 the black population rose to 1,823,779.

The city became overcrowded which resulted in a rise of discrimination and race relations between blacks and whites. The great migration of Southern blacks resulted in Philadelphia having the highest African-American population out of all the cities in the county. Unfortunate, the large number of blacks migrating from the South made the job market highly competitive within the black community.

Christopher Perry knew that in order for the black community to survive and advance to middle class status they needed decent paying jobs and higher education. He became one of the first African American journalists in Philadelphia to use a form of mass media to uplift and educate black Philadelphians about local as well as national social and political issues that needed to be improved. Furthermore, there were many articles featuring upcoming social events, civic affairs, church events, advertisements and job openings for black workers. The Philadelphia Tribune became actively involved in fundraisers and championing racial equality, desegregation of Philadelphia public schools, and for greater employment opportunities for all black Philadelphians.

Christopher Perry and his new editing partner G. Grant Williams began actively involved in the early Civil Rights movement by publicizing the issue of racial prejudice and violent race riots throughout Philadelphia. They took action by supporting fundraisers and activities sponsored by The Armstrong Association, the Philadelphia Association for the Protection of Colored Women, the National Union League, and the National Association for the Advancement of Colored People (NAACP). The variety of editorials, public announcements, and overall make up of The Philadelphia Tribune ranked the newspaper as one of the top five black newspapers in the nation. The Philadelphia Tribune went from distributing 700 newspapers in 1901 to 20,000 by 1916.

Sadly, in the mitts of the Tribune’s prime, Christopher Perry passed away in May 1921. After Perry died, Williams became the new editor of The Philadelphia Tribune. Unfortunately, shortly after Williams became editor, he died in June 1922. Thankfully, Eugene Washington Rhodes took over immediately after Williams’s death. Eugene Rhodes was born October 29, 1896 in Camden, South Carolina and went to the local public schools of the city. After graduating with a B.S. degree from Lincoln University in Oxford, Pennsylvania in 1922, he started working at the Tribune.

Rhodes continued Perry’s and William’s campaign against discrimination within the workforce, segregation of Philadelphia schools, and raising awareness of national civil rights issues. Christopher Perry, G. Grant Williams, and Eugene Washington Rhodes were early civil rights pioneers that used the power of the media to achieve racial equality in Philadelphia. The Philadelphia Tribune is a prime example of “black self-determination” across America.