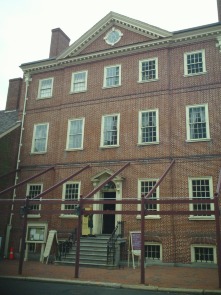 Around 1700, William Penn is believed to have been responsible for introducing coffee to the colony of Pennsylvania. At the time, Pennsylvania colonists did not normally drink coffee on a regular basis due to its high price nor was it as popular as tea. Colonists, however, switched to drinking coffee after the British Government added a high tax to the purchase cost for tea in the late 1760’s. After 1773, colonists in Philadelphia would often visit the City Tavern to drink coffee.

The City Tavern’s construction was funded by fifty-three members of Philadelphia’s social and financial elite. Each subscriber to the Tavern contributed twenty-five pounds. Many of these trustees knew about architecture, including Henry Hill. He was the designer of both Congress Hall and the Old City Hall. The trustees bought the land for the tavern from Samuel Powel. Powel was the last mayor of Philadelphia under British rule. Seven of the trustees supervised the Tavern’s construction, including Joseph Wetherill who supplied the lumber and Thomas Proctor who designed and built the City Tavern.

The Tavern has the distinction of being one of the last Philadelphia Coffee Houses. However, it also considered one of America’s first “hotels.” Tavern visitors were able to stay overnight because there were rooms available for lodgers. In the 1790’s, the Tavern’s trustees hoped to increase the number of guests who would stay overnight by adding a stable for horses. The trustees purchased the house next door in order to accommodate additional overnight guests.

Beginning in 1789, the first two floors of the Tavern were used by Merchants for the buying and selling of goods from incoming ships. The establishment was renamed the City Tavern and Place of Exchange. In 1834, the volume of trade at the Exchange could no longer be accommodated at the Tavern. Given this situation, the Broker house was moved one block west on Walnut and renamed the Philadelphia Stock Exchange.

The Tavern was also a full-service restaurant. The amount and variety of food available at the Tavern was truly a sight to behold to a weary traveler. The Tavern owners were able to use food that had just arrived from Europe, the Caribbean, and other exotic locations in the preparation of meals for their customers. The food, which included dozens of meats and fishes, was prepared in the wood burning fireplaces of the Tavern’s basement kitchens. The Tavern had the country’s first mechanical bell system which was used to summon waiters to the basement to pick up their food orders.

Additionally, the City Tavern was the only location in the colonial capitol to accommodate gatherings of twenty five or more people. President Washington often used the Tavern as a meeting place for presidential gatherings. Some members of the First and Second Continental Congress came to the Tavern to write reports about the day’s activities. These delegates would then have dinner at the Tavern. However, very few female guests ate at the Tavern during the 1700’s. Women were discouraged at the time from eating in public places.

In addition to hosting historical figures, the tavern also played host to the first American chamber orchestra concerts. These were led by Alexander Reinagle, a British born composer, in the Tavern’s Long Room. The Tavern also held “Dancing Assemblies.” These were events where guests could pay a fee to dance in a larger venue.

The original City Tavern met its end in 1834 during what should have been a joyous event. A bride was preparing for her wedding with her bridesmaids on the second floor of the City Tavern. Meanwhile, the groom was waiting to greet his future wife downstairs. No one in the bridal party noticed when a candle set the drapes and rug on fire. The fire led to the demolishing of the Tavern in 1854.

In 1975, developers built an exact replica of the City Tavern according to Thomas Proctor’s original design. Despite the rebirth of the City Tavern, its continued existence was less than a guarantee. On December 31, 1992, Congress closed the City Tavern partially because modern techniques, such as microwaves, were being used in the preparation of the food. Chef Walter Staub made his case before Congress that the tavern should provide an authentic colonial dining experience and he was granted permission to reopened the Tavern, which he did on July 4, 1994. Today, the City Tavern serves the community through the preservation of the Philadelphia colonial dining experience.