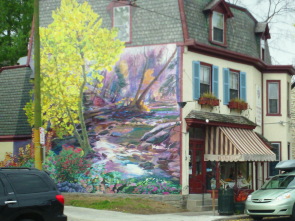 Karen H. Boyd-Rodhe and her husband, Irvin Boyd, purchased the property on Germantown Avenue that would one day become the Bredenbeck’s Bakery in 1979. The actual bakery itself did not open until close to four years later on April 14, 1983 with as Karen states, “the Bredenbeck name, a hope and a dream.” Karen and Irvin also knew that they were taking a risk starting a new small business. The Bredenbeck Bakery, in fact, was the sole small business out of five that opened on Germantown Avenue in 1983 to remain in operation after their first eighteen months. Yet, Karen Boyd-Rodhe believes that “America is the best place to start a business.”

Frederick Robert Bredenbeck must have agreed. He brought his dream of starting his own bakery to America from Germany nearly a century earlier. The first Bredenbeck’s Bakery at 511 Callowhill Street, Northern Liberties, was strictly a bread bakery as Frederick planned. His daughter Ann, however, began experimenting with baking cakes. Her father only learned of these efforts after he found a burnt batch of cakes in the trash. After the incident, she was allowed to make cakes. The tradition of delicious cakes at Bredenbeck was born. Soon, the Bredenbecks opened two addition locations in Germantown and Mount Airy.

Karen H. Boyd-Rohde’s father, Walter Haug and grandfather, Otto Haug, both worked for Frederick Robert Bredenbeck for years. Walter learned the bakery business from Bredenbeck. Walter and Otto Haug eventually went to work for Frederick Robert Bredenbeck’s son, Frederick II, at a new Northeast location at 7364 Frankford Avenue. In 1954, Fred made the decision to retire after he received an inheritance from his mother’s stock market earnings. The Haugs were given five thousand dollars, all the recipes and the Bredenbeck name to take over ownership of Frederick II’s bakery in Mayfair.

By a twist of fate, the Haugs signed the lease for Fred Bredenbeck’s bakery the same week that Karen was born. Karen worked in the family bakery from the time she was seven years old. She has also lived above bakeries for most of her life. Boyd-Rohde states that “she feels blessed that her father and grandfather closed the bakery on Sundays for a family day. It is one of the reasons why “she enjoys baking and likes the bakery business.”

Karen was very interested in forging her own path in her youth. She wanted to go to Culinary School, but her father refused. Eventually she got her degree at Temple to teach Preschool. After college though, instead of teaching, Karen went on to work in hotels and restaurant, leading her back to the family business. She went to work at the Bredenbeck’s bakery in Mayfair. After Karen got married, she and her husband, Irvin, decided it was time to open their own bakery. Karen’s father co-signed the loan. In addition, he gave the couple family recipes, the Bredenbeck name, and his blessing.

The location of the current Bredenbeck’s bakery at 8126 Germantown Avenue includes a storefront, a bakery and ice cream shop, which the couple inherited from a tenant in 1986. Karen and Irvin lived above the bakery until after the birth of their daughter. The business has grown throughout the years. Boyd-Rodhe’s children have recently joined the family business as well. She credits her children with bringing the bakery into the age of social media with a Facebook and Twitter.

Boyd-Rohde has always believed in two rules in running her bakery. The bakery only sells fresh food. Bredenbeck’s gives “day olds” to feed the hungry. Her second rule is that every customer who walks into the Bredenbeck Bakery is unique and special. This mutual support by the community for Bredenbeck and vice versa is reflected in her ten-year campaign to have a mural painted on the side of the Bredenbeck’s bakery. The mural’s purpose was to add to the beauty of the Chestnut Hill Community.

Karen H. Boyd-Rodhe states that she has no plans for retirement in the foreseeable future. In the meantime, Boyd-Rodhe is proudly maintaining the tradition of quality for Bredenbeck as well as fostering the next generation of bakers, namely her children, to continue the baking legacy.