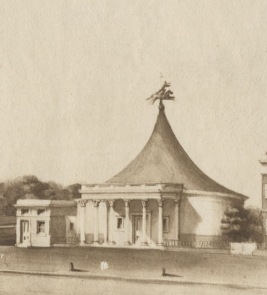 Anyone who has ever enjoyed a lazy afternoon under the big top watching exciting entertainment should give thanks in part to John Bill Ricketts. Ricketts worked throughout his life to exhibit acrobats, horseback riders, and other performers in his Circus. Ricketts’ main mission in life was to entertain but he was also a champion of promoting the acceptance of the circus performer.

John Bill Ricketts was born sometime in the late 1760’s in England. Ricketts had learned how to ride from his mentor, Philip Astley, who had established a riding school in London in 1768. Ricketts also established his own circus troupe based at Edinburgh’s Circus Royal open air theater with John Parker, who was a former dancer. In 1792, he came to Philadelphia and opened a riding school like Astley’s. Many performers of the Circus Royal, including Ricketts’ brother Francis, joined him in Philadelphia to establish the Ricketts’s Circus as well.

The first circus performance in America occurred on April 3, 1793 at the corner of Market and Twelfth in Philadelphia. The term, “circus,” referred to the wooden roofless arena of about eight hundred seats where the horseback riders, acrobats, and even a clown performed their show. The performances of Ricketts Circus continued until July of 1793. In July, Ricketts and his Company traveled to a theater in New York similar to the one in Philadelphia.

While in Philadelphia, Ricketts became friends with George Washington who attended a performance of the Ricketts’s Circus on April 22, 1793. Ricketts and Washington shared a mutual interest in horseback riding. Washington shortly became one of the biggest supporters of the Circus. Yet, many members of the public and some of Washington colleagues were not in favor of the Circus.

Congress had lifted a ban on traveling performers and outdoor exhibitions in 1780, fortunately, before the time of the Ricketts’s Circus. Some people, however, still saw circus performers as troublemakers who were not to be trusted. Ricketts tried to show how much the circus could contribute to the community. He gave to a fund so that the poor would be able to warm homes and also allowed the circus building to house Yellow Fever patients in 1793.

Throughout these years, Ricketts strove to not only entertain, but also educate, and to create a more permanent home for his Circus Company. The Ricketts’ Art Pantheon and Amphitheater which opened at 6th and Chestnut in October 1794 was the realization of both dreams. The new building had a circular structure with a roof and could seat thirteen hundred spectators. The new Amphitheater had performances by dancers, singers, acrobats and clowns for the entertainment of the masses. Ricketts also strived to appeal to a more educated crowd. He presented pantomimes on horseback, which were plays that depicted events such as the Whiskey Rebellion and the Adventures of Don Juan. The popularity of the Ricketts’s Circus grew over the next five years. The Amphitheater jointly hosted Washington’s Birth Night ball with the nearby Oellers Hotel and gave the President a special performance upon his retirement in 1797. Ironically, in 1799, the Circus met its end three days after Washington’s death.

On December 17, 1799, The Ricketts’s Circus burned to the ground along with the Oellers Hotel. A competitor provided Ricketts with money to return to England but he and the ship were lost. In a cruel twist of fate, a newspaper building –that of the Public Ledger - came to occupy the site of the Ricketts’s Circus; many newspapers had criticized the Circus as being a traveling group of performers who were bound to eventually cause trouble. Ricketts’ worked hard to present the Circus as a cultural and educational form of amusement. The Circus in America, however, has gone on to become one of the most popular forms of entertainment for Philadelphians as well as all Americans.