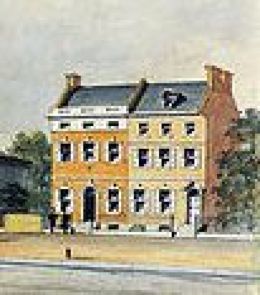 James Oellers’ Hotel was one of the most popular social destinations for Philadelphians and city visitors in the 1790s. The success of the Hotel did not come easy for Oellers. His life was definitely an example of the adage that “if at first you don’t succeed, you should try, try again.” The Oellers Hotel witnessed the occurrence of a number of ‘firsts’ within its walls over the years.

The owner of the Oellers, James Oellers, was born in Scotland but later came to the Colonies. He had lost all of his money working in the sea trade. He, however, managed to have a great deal of success in the inn-keeping trade with hotels in both Germantown and Philadelphia. Oellers decorated his establishment on Chestnut in an elegant French style and chose for the name “Hotel.” While the City Tavern’s manager, Gifford Dalley, started using the term, “hotel,” to describe his establishment in 1789, in 1790, James Oellers, became the first to build and name a place as a ”hotel.”The French word,”hotel,” originally meant any fancy building. Early Americans came to use the word “hotel” to describe any tavern where people could rest from their travels

In 1792, a patron at the Oellers Hotel could have an ice cube in his drink – another first. The ice cube was a previously unknown treat in American. James Oellers sold his neighbors ice from his basement during the hot Philadelphia summers. James Oellers probably got this ice from the frozen Delaware the previous winter. James Oellers also kept easily spoiled food fresh, such as butter and meat, in the Ice House cellar.

The German Waltz was first performed in America at the Oellers Hotel too. In 1793, comedic actor, William Bodley Francis, and ballet master, James Byrne, opened a dance academy at the Oellers hotel. The two performers were originally supposed to work at the new theater across the street from the hotel. The new Chestnut Street Theater, however, was temporarily closed due to the Yellow Fever epidemic. Byrne introduced the waltz, which he possibly learned on a recent European trip, at the hotel. Many other dancers also found work as dance teachers at the Oellers to earn extra money.

The Oellers celebrated President Washington’s birthday with a Birth Night ball each February between 1791 and 1797. The large number of participants at these Birth Night dances required that the guests dance next door at the Rickett’s Circus. After the dancing, the party guests came back to the Oellers for refreshments. Washington actually attended the Birth Night ball at the Oellers in 1792.

The Hotel was enjoying great success in 1799. But sadly, the glory days of the Oellers ended when it caught fire from the Rickett’s Circus on December 17, 1799.

This article was written and reported by [William Gold] of Historical Society of Pennsylvania and originally published on [December 5, 2012].