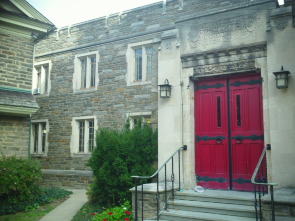 In the 1800’s, children did not always receive their entire education in a traditional classroom. A good example of a non-traditional learning environment was the Sunday School. The Reverend John Price organized one of the first Sunday Schools in the Philadelphia area in 1818. Price’s idea for the Sunday school was to provide instruction to boys and girls of the various congregations in his preaching circuit on Saturday afternoons. In 1827, a member of the First Episcopal Methodist Church of Germantown, John Acuff, also decided to open his own Sunday school in his house on Saturday afternoons. The children in Acuff’s school learned the alphabet, spelling, sewing, and reading. In addition, the following year, the children began learning Bible stories and receiving religious instruction.

In 1828, members of the First Episcopal Methodist Church of Germantown decided to open their own Sunday school after seeing that there was a demand for education, both religious and academic, within the community. Samuel Harvey and John Acuff as well as other prominent members of the Church held a meeting on May 28, 1828 for the purpose of establishing a regular Sunday school. The members approved a charter and decided to adopt the name of “The Sunday School of Germantown, Auxiliary to the Sunday School Union of the Methodist Episcopal Church.”

The Sunday School of Germantown provided a very important service to the Community. Many Church members could not afford to send their children one of the other local schools in the area, the Germantown Academy or the Concord School. Any member of the community was able to send their children to First Methodist’s Sunday School for the base fee of twenty five cents a year. In addition, the children of teachers and board members at the school were also able to attend the Sunday School. Since many of the children did not attend school at all, the Sunday School taught spelling, the alphabet, and reading. The parents were mainly the ones providing religious education. In fact, the religious education by the Church was mainly geared to teaching Adults about the Bible.

In the Sunday School, the teachers used an age appropriate curriculum with classes divided by the child’s age. The students received monthly exams on what they had learned in school. These exams were given by the Sunday School’s superintendent who fulfilled the role of the director of the School.

However, the Sunday School had some strict rules in the 1800’s. Student who spoke in a harsh manner to their teacher would no longer be able to attend the school. In addition, four absences by a student would lead to dismissal. In 1878, the Sunday School of Germantown was remodeled with the permission of the Church trustees for its fiftieth anniversary. At that time, two teachers in the Church school, Kate McDonnell and Matilda Spencer, were inspired by the School’s superintendent Bishop Isaac L Smyth, to go to Tokyo Japan. Spencer and McDonnell taught disadvantaged children in Japan.

By 1895, the Church had established three Sunday schools including the original location on Germantown Avenue. In 1931, the Church Trustees moved this Sunday school to a newly finished building named the Loder Education Building after former pastor, Reverend Ted Loder.

In the 1900’s, the Sunday School program expanded to include a physical education program, a Week- day Bible School for Preschoolers and an after-school program three days a week. All of these programs are still a part of the School today. The Church also host speakers for Adult education and trips and activities for high school-aged students. There is also a confirmation class for six and seventh graders. Therefore, unlike the earlier Sunday Schools, the modern Sunday School at First Methodist meets the needs of the Church’s congregation for religious education.

This article was written and reported by [William Gold] of Historical Society of Pennsylvania and originally published on [November 22, 2012].