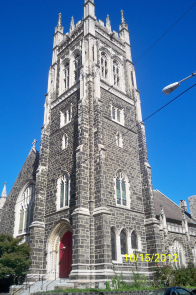 In the 1790’s, it was hard for Methodists in Germantown to find a place to pray in their own style. On June 4, 1796, The Reverend Ezekiel Cooper and a group of eleven Methodists decided to begin praying together on a regular basis. This group would become the first members of the First United Methodist Church of Germantown. For awhile, the Trustees of the Germantown Academy allowed these Methodists to pray at their school. But in 1797, The Academy ran into money problems and needed to rent out the use of the school to paying groups. Afterwards, the Methodists of Germantown found other homes and public buildings of Germantown where they could hold their meetings.

Besides Daniel Pastorius, Jacob Reger was an important person responsible for the building of the Methodist Church. Jacob Reger had promised Hannah Shrader that he would take her daughter, Dorothy, to St George’s Methodist Church in Philadelphia every Sunday. Jacob made this promise because it was only way that Hannah Shrader would let him marry Dorothy. In 1799, The Reverend Ezekiel Cooper married Jacob Reger and Dorothy Shrader. A short time later, Jacob Reger became a Methodist and Jacob and Dorothy began hosting meetings of the Germantown Methodist in their home.

Until 1803, the Germantown Methodists held their meetings in the home of Jacob and Dorothy Reger as well as the home of another congregation member, Joseph Jacobs. By that time, Henry Boehm and Daniel Pastorius had raised enough money to purchase land from Jacob Reger to build a permanent building to use as their church. In early 1803, the building of new Methodist Church began on Haines Street at Germantown Avenue.

As ‘The First Methodist Episcopal Church of Germantown’ grew in membership, the Trustees found that it was necessary to purchase more land to expand the church. The Trustees purchased land for a cemetery in 1812 and doubled the size of the church after purchasing more land in 1813. Eighty years later, the Church Trustees of the First Methodist Episcopal Church of Germantown purchased the Pastorius House at the corner of Germantown Avenue and High Street from William Dunton. The building of the new Methodist Episcopal Church at this site was finished on April 10th 1898. The church still stands there today. In 1912, the trustees would purchase the Green Tree Tavern next door. The Church used the tavern for various purposes over the years, including as a Church office and a Sunday school.

This article was written and reported by William Gold for Historical Society of Pennsylvania and originally published on November 7, 2012.