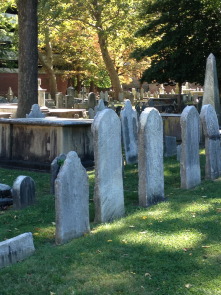 For over two hundred years, Christ Church and its two affiliated cemeteries in Old City Philadelphia have been points of interest for tourists, students and history enthusiasts. The Church has remained in its original location on Second Street, just north of Market Street since its foundation in 1695. Adjacent to the church is the original burial ground; however, in 1719 the Church purchased two more acres of land to serve as additional burial space for members of the congregation. This area on the corner of Fifth and Arch Streets serves as the resting place for more than 1000 members of the church community, including a number of important figures responsible for the success of American independence and freedom.

One of the notable figures buried in the Fifth Street cemetery is Doctor Benjamin Rush. He was a signer of the Declaration of Independence and had a reputation for his medical work both as a physician and in the psychiatric field. The public respected Dr. Rush for his assistance during the Yellow Fever epidemic in the summer of 1793. During the outbreak, members of the Philadelphia community and persons outside of the city petitioned Doctor Rush to cure or check up on family members. In addition to his medical successes, Benjamin Rush is credited with the founding of Dickinson College and the Philadelphia Dispensary. He was also an outspoken supporter of abolition even before the Revolutionary War. When Doctor Rush died in 1813, he was interred in the Christ Church cemetery.

Among the most influential and well-known Philadelphians, Benjamin Franklin is perhaps the most beloved and famed for his many successes in government, society and science. The Franklin family had a plot of land in the northwestern corner of the cemetery. Upon his death in 1790, Benjamin Franklin’s family and many friends buried him in the family plot, which he would share with his wife Deborah and children, Francis and Sarah. Like Rush, Franklin was also a signer of the Declaration. Three more signers were also buried in the cemetery (Francis Hopkinson, Joseph Hewes and George Ross). In 1858, Franklin’s descendents asked that the brick wall surrounding the cemetery be opened so visitors wishing to pay their respect could do so day or night. The Church opened the wall and installed a metal fence. Over time, Franklin’s grave has collected a number of pennies, which visitors have left to honor Franklin’s adage: “a penny saved is a penny earned.”

In addition to the famous Philadelphians buried in the cemetery, many wealthy Philadelphians who, though not noted in history books, were important members of society in the 1800 and 1900s are buried in the Fifth Street cemetery. In the early 1800s, some of these congregants commissioned elegant vaults, twenty in total, each accommodating 20 family members.

In 1864, Edward Lyon Clark, an official of Christ Church, compiled an anthology of all visible epitaphs on graves. This began the conservation effort of the burial ground. Currently 1300 original markers remain and conservators have added plaques to graves on which the carvings have faded or the marker is missing. Conservators are constantly working on rebuilding grave markers, (using pins and mortar to restore broken pieces), keeping the landscape clean and maintaining the brick wall surrounding the plot. The original wall was constructed in 1772 but was rebuilt 1927, using most of the original masonry and the capstone.

The cemetery is now an important monument to some of Philadelphia’s most patriotic and adored citizens. The site is open to visitors for a very small fee for most of the year. Check out the website for specific admission rates and hours.