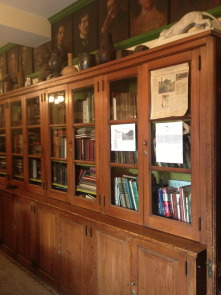 In 1860, a group of six Pennsylvania Academy of the Arts students met at 125 South 11th Street to sketch and explore art in a manner they felt they could not in the highly structured classroom environment of the Academy. This artistic student community became the Philadelphia Sketch Club.

The Club offered students a place to exercise their skills and practice techniques that, due to construction on Academy property, the School was struggling to provide. Life drawing classes were offered within the Club, under the instruction of Thomas Eakins, for example. In 1876, when the construction finished and the new building opened, Eakins offered to continue teaching and took a position at the Academy. Thomas P. Anshutz succeeded Eakins at the Sketch Club, first as an instructor and later, from 1910 until his death in 1912, as President of the Club.

The same general idea and structure have remained for 150 years. As well as continuing to offer classes and hosting many exhibitions, the Club presents an annual a competition for members. This competition has been held every year since 1865. The competition takes the form of an exhibition, which includes all forms of visual arts- painting, drawing, photography and sculpture among others. Although the Club was dominated by men until the second half of the 1900s, women have been recognized as winners of these competitions since their admission. The Philadelphia Sketch Club offers a welcoming, low-pressure environment for all artists. Members come from all different educational and artistic backgrounds and can become members through payment of a low fee.

Also, save for an executive director position, the dedicated members run the club. These volunteers are passionate about the club and so help maintain the building and moderate classes.

The current site of the Philadelphia Sketch Club is at 235 South Camac Street, a combination of three brick row houses constructed in the early 1800s. The Sketch Club purchased two of the homes in 1902 and the last in 1908. The three connected homes serve as the exhibition and classroom space, and also include a dining room, billiards room, library and archive, garden and kitchen space. Upstairs is the large gallery space where classes are held, and on the first floor are meeting rooms with fireplaces and beautiful carvings edging the walls. The meeting room can serve as a smaller exhibit space as well. Throughout the entire Clubhouse are stained glass pieces, paintings by past and present members and metal or wood sculpture. Historically, the Club has conducted a number of social events as well. While this has not come to a complete halt, there are fewer currently.

The Library of the Club holds the archival collection- including a history of the Club, information on the members and the historical building. Bordering the Library along the walls are forty-four portraits of early members of the Club, done by the past president Thomas P. Anshutz. A number of other well-known artists have come through the Club including Walter Emerson Baum, Hugh Henry Breckenridge, George Spencer Morris, N.C. Wyeth and Samuel Yellin among others.

The Philadelphia Sketch Club has a many opportunities for members and non-members. Check out the website for detailed schedules and fees.