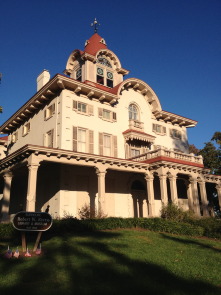 The most highly visited historical sites in Philadelphia lie in Center City and the immediate outlying neighborhoods of the City. One of the most eccentric museums, however, is in the Northeast, boasting a large and strange collection of items from Europe, the United States and Asia as well as offering the neighborhood community a small lending library. This is the Ryerss Museum and Library, where, upon entering, visitors are met by taxidermy Chinese Cayman poised on its hind legs.

The collections are housed in the mansion of Joseph Waln Ryerss located on his Burholme Estate. The 85 acre estate was purchased in 1859 as a summer retreat. Joseph was a descendant of Nicholas Waln who had come to Philadelphia at the same time as William Penn in 1682. The Penn and Waln families were both members of the Philadelphia elite. Joseph had a penchant for travel and went to Asia where he collected many items- ceramic, stone, taxidermy, paintings and household wares.

When Joseph died in 1868, his son Robert Ryerss continued the tradition of travel and collection. He worked as a lawyer but managed to amass an impressive collection to add to his father’s. Eight months before Robert died he married his hired housekeeper, Mary Ann Reed. Robert stipulated in his will that the house, grounds and collected items would be given to Philadelphia following his wife’s death. She continued the Ryerss family tradition of collecting but finally gave the house and items to the city in 1905 before she died. The museum opened to the public in 1910.

One of the great features: the museum is forever free! (though donations are highly appreciated)

The Ryerrs museum’s collection and atmosphere are quite enjoyable. After walking into the foyer, the exhibit moves through all the rooms of the house and collected items are everywhere, hanging from the ceilings, organized in cases and spread through the hallways. The library is located on the second floor where two bedrooms used to be. The library has classics, new titles, and Robert Ryerss’ extensive collection of titles. Besides a free museum and free library, the Ryerss Museum puts on a number of events throughout the year that are open and free to the public.

The Ryerss family was dedicated to philanthropy and their generosity continues into the present day.

The Ryerss family was not only supportive of the Philadelphia community but also had a great love for animals. Joseph Ryerss’ wife Anne put her philanthropic energy into helping prevent animal cruelty. She and her husband donated money to help found the Philadelphia Society for the Prevention of Cruelty to Animals (SPCA). Anne also had an affinity for horses and supported retired equines on the Burholme property. When she decided to organize a more serious retirement home for horses, she invested $30,000 in the creation of the Ryerss Farm for Aged Equines. She allotted another $40,000 for its maintenance. The Farm, originally in the Philadelphia area, is now located in Pottstown due to space and financial reasons. The Ryerss also kept a space on the mansion grounds for a pet cemetery with headstones for each of their beloved animals.

Among the famed Philadelphians of the past, the Ryerss family has remained largely overlooked. However, the family has left the city a legacy of philanthropy and knowledge. Through their travel and subsequent generosity, Philadelphia has received a collection of items from all over the world for the neighborhood community to enjoy and from which to learn.