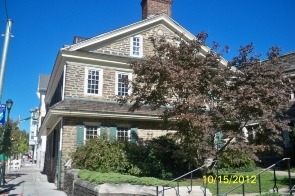 A visitor to the Green Tree Tavern on Germantown will find the initials, “D.S.P.” and the date “1748” carved into a stone under the building’s roof at the gable ends. This message in stone tells the visitor a lot about the tavern’s history. Daniel Pastorius built the Green Tree Tavern in 1748. Daniel Pastorius made saddles for horses so the tavern originally had the name ‘The Saddle Arms’. Daniel was the grandson of the founder of Germantown, Francis Daniel Pastorius. Sarah Pastorius, his wife, was the cook at the Saddle Arms Tavern. The Saddle Arms Tavern became famous throughout Philadelphia for Sarah’s cooking. The tavern was also a famous stopping place for visitors for on sleigh rides known as ‘sleighing parties’.

As was common for the time, Sarah was widowed more than once. She lost her beloved Daniel after twelve years of marriage when he died in 1754. Daniel Mackinett bought the ‘The Saddle Arms’ and married Sarah Pastorius in 1757. Sarah became a widow once again when Daniel Mackinett died four years later in 1761. Sarah went on to live another thirty four years; raising seven children. Sarah never remarried after the death of Daniel Mackinett.

Over the next 150 years, the Tavern had more owners than Sarah had husbands. In 1775, Sarah’s three sons, Daniel, Abraham, and Samuel, bought the tavern. The three sons ran the tavern with two other businessmen, Andrew Heath and Andrew Colladay. In 1830, The Green Tree Tavern was purchased by the grandson of Sarah Pastorius, Charles Mackinet Pastorius. On June 4, 1838, Pastorius sold the Tavern to a Philadelphia lawyer, John Wells. Wells was the owner until August 19, 1850. The founder of a Philadelphia drug company, George W. Carpenter, bought the tavern from Wells. The property passed to Carpenter’s wife and children when he died in 1860. Joseph H. Dunn, a Philadelphia lawyer, bought the Tavern from Carpenter’s widow in 1885. Green Tree Tavern continued through all these owners to be a fashionable inn for wealthy Philadelphians to escape the heat of the city.

The Tavern also has had several different nicknames over the years. After 1761, the tavern had the nickname the ‘Widow Mackinett’s Tavern’ because Sarah was twice a widow. During the 1850’s, the tavern was called the ‘Hornet’s Nest’. It got this nickname because there was an enormous hornet’s nest kept at the tavern as a sightseeing attraction. Charles Mackinet gave the tavern the name “Green Tree Tavern” when he purchased it in 1897.

The Green Tree tavern was the site of the first meeting to establish a school for the children of Germantown in December 1759. Daniel Mackinett, the owner of the tavern, was the host of the meeting. The Committee met several more times at the Tavern to finalize plans for the funding and construction of the school, which eventually became Germantown Academy.

The Green Tree Tavern has provided food and lodging for several historical figures. George Washington possibly visited the tavern for refreshment during the summer of 1793 and 1794. The first Secretary of State, Thomas Jefferson, wrote in November 1793 to James Madison, a well known member of the newly formed House of Representatives, that the best available bed in the Tavern was in the corner of the bar. The General Marquis de La Fayette, a hero of the American Revolution, was supposed to have a dinner at the Tavern in his honor during his visit to Germantown in 1825. It was decided at the last moment that the Tavern was too small to host the dinner for General La Fayette. The dinner was moved to the ancestral home of the Chews, Cliveden. Benjamin Chew’s sixteen year old daughter, Ann, was the host for Lafayette’s dinner.

The Green Tree Tavern became a private residence in 1901. Emma M. Smith, daughter of Joseph H. Dunn, and her husband Dr. Alexis Dupont Smith began to restore the Green Tree Tavern shortly after inheriting the property. Dr. Smith found an antique slipper under a third story floor board when he and his wife were doing restorations. Dr. Smith believed the slipper was a touching reminder of the tavern’s heyday. In 1912, The Smiths sold the Green Tree to the First United Methodist Church of Germantown.

This article was written and reported by [William Gold] of Historical Society of Pennsylvania and originally published on [October 24, 2012].