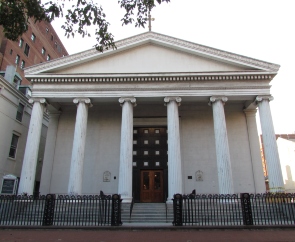 At 8th and Spruce is located St. Georges Cathedral of Philadelphia. The Greek Orthodox Church serves the community in Washington Square West and surrounding neighborhoods. This church building, however, has been home to more than one congregation in its almost 200 year history.

The church’s long and diverse religious and cultural history began during the early 1800s. Though today St. George’s serves the Greek Orthodox community, it began as the home of an Episcopal congregation. The steadily growing population in Philadelphia during the early 1800s prompted the need to form a new Episcopalian congregation. Funds were raised for a new parish, and in 1822 the new Episcopal congregation commissioned John Haviland to design the church, to become St. Andrew’s Episcopal Church.

Famed English architect John Haviland designed many famous landmarks in Philadelphia. Born in Sussex, England, he apprenticed with fellow English architect James Elmes. Haviland left England in 1815 to further his career in Russia. He then left a year later in search of opportunities in America. Settling in Philadelphia, Haviland designed his most famous works here. These included the Eastern State Penitentiary, the Walnut Street Theatre, the Franklin Institute, and the First Presbyterian Church as well as St. Andrew’s Episcopal.

Haviland was a talented architect known for his attention to detail. He favored symmetry and simplicity in his designs. He commonly worked in both the Roman Classical and Greek revival style popular during the nineteenth century. Haviland designed St. Andrew’s in a similar manner. The church’s white façade features large Ionic columns common in the popular Greek revival style.

In the early 1900s, the number of Eastern European immigrants to the United States skyrocketed. Poor economic conditions and political turbulence overseas brought many to America in search of new opportunities and in hope of living the ‘American Dream’. Many Eastern Europeans settled along the Eastern seaboard and in its major cities, including Philadelphia. These immigrants brought with them cultures and religions relatively new to America. Putting down roots, they established their own neighborhoods and made a life for themselves.

St. George’s congregation has now occupied the church for ninety years. Under the Greek Orthodox Metropolis of New Jersey, the Greek Orthodox Archdiocese of America, and the Ecumenical Patriarchate of Constantinople, St. George’s continues in its mission to preserve its orthodox traditions. The church holds Orthos and Divine Liturgy every Sunday as well as lunch every Friday serving traditional Greek food. Through religious education and community outreach, St. Georges strives to support and preserve the Hellenic culture it brought to and fostered in Philadelphia.