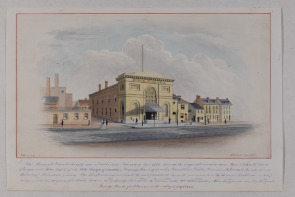 The curtains first were raised at the Musical Fund Hall of Philadelphia, the city’s oldest music society, on December 29, 1824. The Musical Fund Society of Philadelphia, the city’s oldest music society, held the hall’s first concert on this date. Excited Philadelphians came to the theatre to hear the Society’s featured musicians and vocalists perform at their new home. On the bill that night was an impressive list of sets including pieces by composers Händel and Mozart.

The construction of the Musical Fund Hall was prompted by the Musical Fund Society’s need for a permanent home and theatre. The Society was founded four years earlier in February of 1820. The group held concerts at both the Masonic Hall and Washington Hall in Philadelphia. After the latter burnt down, it was in need of a new venue. The Society purchased a lot on Locust between 8th and 9th. Originally the home of the 5th Presbyterian Church, renovations on the building began in May of 1824. Noted Philadelphia architect and Musical Fund Society member William Strickland both planned and oversaw the Hall’s construction. The cornerstone was laid on May 25, 1824 and the Hall completed on Christmas Eve of that year, just five days before its first concert premiered.

The Musical Fund Hall was also the site of many important state and national political events. The Marquis de Lafayette attended a reception in his honor at the hall on July 19, 1825 during his tour of the United States. A decade later, in 1837, Pennsylvania’s Constitutional Convention took place there for a three month period. Most notably, nearing the Civil War, the first national convention of the budding Republican Party was held at the hall in 1856.

The Hall continued to be the premiere location for concerts and events in Philadelphia for decades. In 1857, however, the newly constructed Academy of Music opened and many performances were moved to the new theatre. While concerts continued at the old Hall, they became few and far between. The theatre struggled to maintain its reputation as a premiere performance location. It was repurposed for such uses as a basketball arena, boxing venue, and cigar warehouse. By the mid 1900’s, the Musical Fund Society had sold and repurchased the hall twice, eventually deciding to sell it for a third and final time. It was purchased by developers in 1980 who renovated it to its current state as an apartment complex.

Though the Hall no longer stands as a music venue, the Musical Fund Society continues to thrive and remains a supporter of Philadelphia’s music institutes. Famous for its concerts, the members’ original and primary purpose in founding the Society was to support Philadelphia’s struggling musicians and their families. Throughout its history, the Society has put its performers first. When concert costs threatened the Society’s charitable fund, it cut back in order to maintain a healthy endowment for its players.

The Society also set forth to foster and grow a larger audience for classical music in the city. It attempted to promote a greater appreciation by doing such things as holding weekly public concert series and sponsoring contest for original composed pieces. When the Academy of Music opened and the Musical Fund Hall became less relevant, the Society still maintained a major presence in Philadelphia music. It continued to support groups such as the Philadelphia Orchestra and other music conservatoires in the city. Today, the Musical Fund Society’s main focus is supporting and cultivating young up and coming musicians in their education. Through grants, scholarships, and donations, it looks to support the future of the arts in Philadelphia.