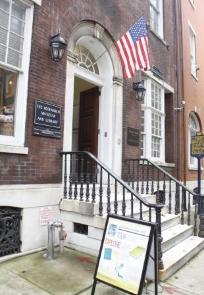 The Rosenbach Museum and Library is the Rittenhouse legacy of two very different brothers: a book-lover and an antiques dealer.

A. S. W. Rosenbach (1876-1952) was an impressive book dealer who bought and sold everything from the Gutenberg Bible and Shakespeare folios to children’s books. He was known as the “Terror of the Auction Room” by London papers and “the Napoleon of books” by the New Yorker, but he was also known for his genuine adoration of the written word. A. S. W. (or Abe, as family and friends referred to him) was actually a quiet and thoughtful child. The youngest of eight children, he adored reading and books from an early age.

His older brother, Philip (1863-1953), opened up a store selling trinkets and antiques while Abe was still in college. Abe joined him after graduation with a determination to buy and sell books. This partnership became what was soon to be the world renowned Rosenbach Company.

While Abe was a super-salesman in the auction house, it was Philip who became the face of the company. His remarkable self-confidence and communication skills aided the company’s success. His antiques and art, however, never proved as profitable as his brother’s books. The only time Philip truly made money was when a truck full caught fire enabling him to collect the insurance! Still, he always thought of new business schemes and adventures, and it was Abe’s books that financed them.

Abe also had his business weakness. Normally ruthless in his book turnover, he became very attached to some of his purchases and refused to sell. Soon he grew an enormous library, and became one of the first major collectors of American and children’s literature. Some of his treasures include the manuscript of James Joyce’s Ulysses and the only surviving copy of Benjamin Franklin’s first Poor Richard’s Almanack.

Abe died in 1952, and Philip followed a year later. In 1954, a gift left by the brothers was used to found a museum and library that would house and exhibit both of their collections. Today, the Rosenbach Museum and Library has more than 30,000 rare books, 130,000 manuscripts, and numerous antiques and paintings. Programs and exhibits delve into the histories and stories of these objects, to the delight of book-lovers everywhere. The collection is, indeed, priceless, for as Abe Rosenbach has said, “It is not rarity alone that places the value upon a book, although the word sounds entrancingly to the ear of the bibliophile. It is the intrinsic worth of the volume itself, its place in literature, history or the arts, that sends the prices up . . .”