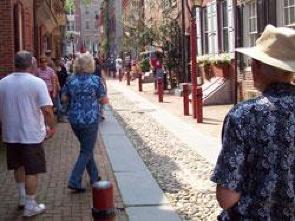 Elfreth’s Alley is popularly known as “the oldest street in America,” but not many know that its history had nearly disappeared completely by the 1930s. It was thanks to one woman that Elfreth’s Alley became the landmark it is today.

Elfreth’s Alley formed only twenty years after the colony of Pennsylvania. In 1702, two blacksmiths each gave up a portion of their adjoining land to create the alleyway that can still be seen today. Overtime, houses were built on the alley. Throughout the 1700s, numerous craftsmen and merchants lived in these houses. Jeremiah Elfreth, a glass blower, was the source of the street’s name. The street quickly became very diverse; a former slave, English colonists, and a Jewish Merchant all lived here for a time. During the American Revolution, Elfreth’s Alley housed both patriots and loyalists.

The Industrial Revolution in the 1800s brought a new wave of immigrants from Europe to Philadelphia. The growing number of factories in the city provided new work opportunities. Elfreth’s Alley became a predominately Irish and German neighborhood. For decades it housed many generations of the same families.

By the early 1900s, the area had become impoverished, dirty, cramped, and overshadowed by the nearby factories. Elfreth’s Alley was likewise dilapidated, and faced threats of demolition even though many still inhabited it. Even the name was lost – in an attempt to simplify Philadelphian maps, it was renamed the 100 Cherry Street block.

Dorothy Ottey had moved into one of the Alley’s houses in 1933 and opened up a lunch counter to serve factory workers. She saw the historic worth in the Alley and began to publicly advocate for its restoration. She and a group of fellow residents formed the Elfreth’s Alley Association in 1934 in order to save certain houses from demolition.

Ottey continued to recruit volunteers by writing to the Evening Bulletin, and eventually gained the interest of the Philadelphia Society for the Preservation of Landmarks. By 1937, Philadelphia Mayor S. Davis Wilson promised financial support. The Elfreth’s Alley Association then successfully lobbied for the street’s old named to be reinstated.

The Association was called to action again in the 1950s. The building of Interstate 95 originally called for the destruction of seven Elfreths’s Alley houses. Both the Association and many Philadelphians protested. A revised plan suggested only two houses needed to come down, but the Association still opposed it. Through petitions and letters, Elfreth’s Alley was allowed to remain whole.

The Elfreth’s Alley Association today is a non-profit that continues to protect the interests and integrity of the area. The Alley is considered a “living museum.” While thousands of people visit it every year, people still call it home too.