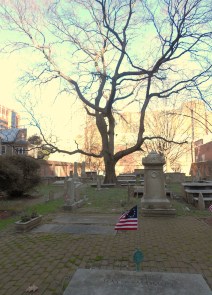 Mikveh Israel Cemetery is nestled in the allies of old city Philadelphia near the intersection of Ninth and Locust streets. Dating back to 1740, the cemetery is the oldest record of the Philadelphia Jewish community.

The cemetery was establish by prominent merchant Nathan Levy when he sought a parcel of land from Thomas Penn (son of William Penn) on which he could bury his son in accordance with Jewish law. Thomas Penn allowed Levy to purchase a small lot to be surrounded by a “fence of boards … [in] an area characterized by woortleberry (sic) bushes and cows grazing in open fields.” The cemetery evolved into a communal burial ground for colonial Philadelphia Jews.

The cemetery was expanded in 1752 by Levy and in 1765 when Mathias Bush, a member of the newly established Mikveh Israel Congregation, was granted a parcel adjacent to Levy’s for Jewish burials as well. After the grave markers became bait for target practice in 1751, Levy enclosed the grounds with a low lying brick wall. Urban mythology tells that the cemetery wall was used by occupying British forces in 1777 as a backdrop for executions. In 1803 the original brick wall was replaced with a higher one, and ornate iron gates were added to the entrance along with a sandstone marker, telling passersby of the cemetery’s history.

After the discovery of a crucial document, in which Nathan Levy’s intention of allowing the cemetery to operate under the congregation is illustrated, and an act of Pennsylvania legislature, Mikveh Israel Synagogue was given ownership rights of the cemetery in 1828.

The oldest decipherable tomb is that of Nathan Levy. Among the other distinguished members of the Philadelphia Jewish community who are now interred at the cemetery are great American patriot Haym Salomon, influential pioneer Aaron Levy, members of the Gratz and Phillips families, scores of Jewish veterans of the wars of the American Revolution and of 1812, all alongside distinguished leaders of the Mikveh Israel synagogue.

Since 1956 the cemetery has been deemed a National Historical shrine as well as an extension of Independence National Park. The cemetery has also been on the rooster of the National Register of Historic Places since 1971.

A trust has been established to ensure the perpetual upkeep of the cemetery whose history applies not only to Jews or Philadelphians, but to Americans at large as a testament to the tolerance that has governed this great nation since Penn first landed on the shores of the Delaware River.