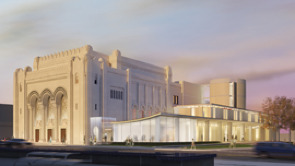 Congregation Rodeph Shalom is the oldest Ashkenazic synagogue in the Western Hemisphere. The term “Ashkenazic” refers to people of the Jewish faith who are descended from medieval communities along the Rhine in Germany. This particular congregation was founded by Orthodox Jews from Germany, Holland, and Poland. It was originally founded in 1795 as a minyan; a "minyan" consists of the required ten adults necessary for certain religious practices and does not require a rabbi. In 1812 it became the first chartered synagogue in Pennsylvania and was renamed Rodeph Shalom (German Hebrew Society).

The Congregation has a strong sense of origin, and for many years the accompanying school taught only in Yiddish and German. From its very beginning, however, there began a steady theological evolution from Orthodox to Reform Judaism. The catalyst for that change was Rabbi Marcus Jastrow, an activist, scholar, writer, and teacher who became a nationally renowned Talmud scholar. He was connected to Rodeph Shalom from 1866 to 1892.

The Congregation was notable for reaching out to recent immigrants throughout the 19th century, providing them welcome and safe haven. Members from Northern Europe were able to join at a reduced rate or, in cases of poverty, for free. This was only one instance of the welfare and charity that the Congregation felt necessary. It also contributed aid to synagogues out of state, from New York City to New Orleans. This attitude toward social action is still part of Rodeph Shalom today.

Rodeph Shalom erected its first home at Broad and Mt. Vernon Streets in 1868, but quickly outgrew its sanctuary and office areas. Thus, in 1928 the Congregation built a new structure at the same location that was inspired by the Great Synagogue in Florence, Italy. This Moorish Revival building is an exemplary piece of Philadelphian architecture.

Today Rodeph Shalom is as vital as it ever was. Many families have been members for generations, and some can trace their families’ membership straight to when their ancestors first arrived in Philadelphia. This is a community whose strength in the past has created an equally strong present.

Lately, the Congregation has made efforts to connect to their larger community – Philadelphia. It has continued its dedication to philanthropy and social action through numerous initiatives. For example, it is one of 35 congregations that have joined to form P.O.W.E.R., a faith-based group with members from a diversity of religions, cultures, and neighborhoods. P.O.W.E.R. aims to change the social and economical problems that many Philadelphians face.

The Congregation is also home to The Philadelphia Museum of Jewish Art, a free space that welcomes anybody and everybody to view contemporary Jewish art. Rodeph Shalom’s success in maintaining its historical purpose while simultaneously reaching out to people from a diversity of backgrounds is a testament to the Congregation’s members and their clear vision.