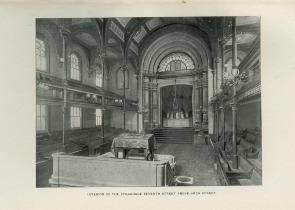 Mikveh Israel history begins not with the construction of a building, but with the development of a community. In colonial Philadelphia, Jews were not plagued by hostility or repression but were allowed to meet with other Jews and worship freely and openly. In 1740 wealthy merchant Nathan Levy applied for a parcel of land to bury his child in which he could follow the burial rituals of Judaism. Thomas Penn, royal proprietor of Pennsylvania, granted him the plot, which evolved into a communal Jewish cemetery. From the community established around the cemetery on Spruce Street, Minyans (small gatherings for worship) were held in private homes. When the Minyan grew, spaces were rented to accommodate the growing Jewish population of Philadelphia.

As a result of British occupation during the Revolutionary War, Jews from New York, Richmond, Charleston, Savannah, Lancaster and Easton sought refuge in Philadelphia. By 1780 a New York Hazan (spiritual leader) came to Philadelphia and established the Spanish-Portuguese forms of prayer and service structure that remain the standard at Mikveh Israel.

Due to the influx of new members during the Revolutionary War, land was purchased on Cherry Alley and laborers were hired to construct a permanent home for the congregation in 1782. The building was listed as housing the Hazan, a school, and a Mikveh (ritual bath.)

The congregants of Mikveh Israel rose to prominence throughout the city for their activism and social reform efforts. Members of the congregation were outspoken against The Stamp Act, and became well known through their “Protest of Religious Test Oath” which influenced the exclusion of a religious oath of office from the constitution. Members of Mikveh Israel were also responsible for the creation of the first Jewish charity in the city in 1783.

In 1788, after many of the congregation’s members who had sought refuge from the Revolutionary War in Philadelphia left the city to return to their homes, the congregation was left in a state of financial woe. A subscription list was submitted to “worthy fellow citizens of every religious denomination” for assistance. Contributors included the likes of David Rittenhouse, Thomas McKean, and Benjamin Franklin.

By 1825, a new structure to house the congregation was needed. William Strickland designed a larger synagogue on the same site as the original edifice. In the years before the Civil War, the Jewish population of Philadelphia continued to grow necessitating the construction of another new structure in 1860 built by John McArthur Jr., an architect perhaps best known for his design of Philadelphia’s own City Hall. At the turn of the 20th century, yet another synagogue was built to accommodate the shift of the Jewish population towards the area bound by Broad and 16th streets above Girard Avenue.

In the mid 1900s, the cemetery on Spruce Street, where Mikveh Israel began, was declared a national shine and included among the sites of Independence National Historic Park.

The congregation’s final move of the synagogue occurred in conjunction with the Bicentennial celebration, officially opening on July 4th, 1976. Mikveh Israel relocated to Independence Mall, close to its original homes in Old City. While the places Mikveh Israel has called home have been spread throughout the city, the synagogue’s legacy as an integral part of the history of Philadelphia has never lost its place.