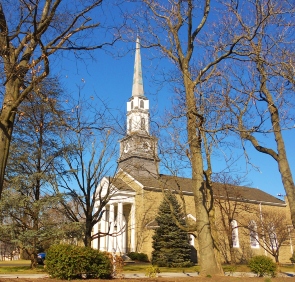 The First Presbyterian Church of Chestnut Hill grew out of religious services organized in 1850 by Reverend Roger Owen, head of a Chestnut Hill boarding school. The church was chartered in 1852, and construction on a new church to house the congregation began that summer at the intersection of Rex and Germantown Avenues. Work, however, was halted due to finances and the church was not completed until a full year later in 1853.

A new church building was deemed necessary to house the growing congregation in the late 1940s. When the foundation for the new church was dug, enough stone was excavated to build the new church in its entirety.

In the decade following the new church’s opening in 1950, the congregation grew to 1300 members requiring expansion. Additions added included a separate wing for the thriving Sunday school (as a result of the mid-century baby boom,) a choir room, a new kitchen, and an organ, among other countless improvements to the existing structure.

The modern history of the church includes further renovations to the building, and a thriving congregation.