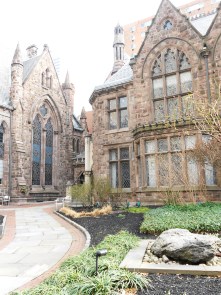 The First Unitarian Church of Philadelphia was established by twenty of the city’s preeminent 18th century intellectuals as the First Unitarian Society of Philadelphia in the summer of 1796, making the institution the first continuously functioning Unitarian church in the country. Unitarian Minister Joseph Priestly, the chemist who is credited with discovering oxygen, guided and encouraged the original founders after fleeing England due to religious persecution from disgruntled supporters of the Church of England. The congregation’s services were led by members until the young Bostonian W.H. Furness took on the role as minister in 1825, a position which he held for fifty years. W.H. Furness is credited with establishing the identity of the church as one geared toward activism and social concern through his abolitionist beliefs and Underground Railroad activities.

The church currently resides in its third building, which was designed by the famed Frank Furness, son of W.H. Furness. The building was constructed in 1883 as an answer to Ralph Waldo Emerson’s request for a “distinctly American architecture.” The church seats 700, and houses the first Tiffany window installed in Philadelphia. Along with many important decorative embellishments, the church is home to art works by the likes of John La Farge and Henry Holiday. The previous two homes of the congregation were designed by Robert Mills and William Strickland respectively.

The building and its collection were threatened by a drastic drop in membership during the middle of the 20th century, yet church members decided to stay in their historic Center City location and opened their parish house as a religious, cultural, and political outlet for the neighborhood. First Church is proud in the way it serves its community - within the congregation and beyond - by hosting events such as exercise classes, Narcotics Anonymous meetings, local political rallies, and art festivals.

Music acts an integral part of the First Church community. The church, which is equipped with a concert-grade Casavant pipe organ, holds children’s music classes four times a week, classical music concerts, and is a prime venue for alternative concerts hosted by R5 Productions in the sanctuary, chapel, and basement of the church. These concerts provide drug and alcohol-free entertainment for the youth of Philadelphia.

The First Unitarian Church of Philadelphia continues its legacy of tolerance and social reform more than 200 years after its founding.