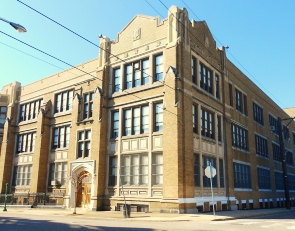 The socio-economic landscape of the city is ever changing. Trends to move further from the city center have created thriving suburban towns, but have also left inner-city neighborhoods to desolation and decay. While gentrification efforts are made to reinvigorate struggling neighborhoods, the identity of a community and its residents are often sacrificed. The victims of changes in social patterns throughout the city are the businesses, institutions, homes, and people who are displaced by change. West Philadelphia Catholic High School has become one of those victims.

The West Philadelphia Catholic High School for Boys was established in 1916 to address the growing Catholic Population of the western part of the city. An additional High School was built for the education of the area’s young women in 1927. Enrollment at the schools thrived well into the 1950s. As the trend towards suburbanization grew, the student body decreased and the neighborhood demographics changed. In order to survive the changing identity of the area, the two schools joined to become the Co-Educational West Philadelphia Catholic High School, opening for the start of the 1989 school year. The school continued a tradition of excellence and diversity, receiving multiple “Blue Ribbon School of Excellence” awards, and earning millions of dollars in scholarships with each graduating class.

In 2012, the Archdiocese of Philadelphia slated the school for closure, along with 48 other catholic schools forced to close or merge due to decreasing enrollment and poor finances throughout the Delaware valley. Brother Tim Ahern, president of the West Philadelphia Catholic High School, decided not to appeal the decision of the Archdiocese as “there are fewer and fewer kids in the Southwest and West Philadelphia area to attend a Catholic school.” Since 1960, the archdiocese’s overall enrollment has fallen from 270,000 students at its peak, to its current level of 68,000 students. Arguments have been made both within and outside of the West Catholic community blaming the closure on neighborhood demographics, increasing numbers of public charter schools, modern familial values, tuition fees, and corruption with the church. But regardless of personal opinions, a school will be lost, students will be uprooted, and faculty displaced.

In a letter written to the West Catholic High School Community shortly after the announcement of closure, Alumnae Association president Helen Sheridan said; “’West is Best’ is our motto. In the hearts of all graduates, West is and always will be the Best.” While the school will close its doors for a final time this summer, those very doors will have welcomed and educated thousands of students from all over the city and state and of all backgrounds for almost 100 years, leaving an everlasting impact on the identity of West Philadelphia and the city at large.