The Philadelphia High School for Girls 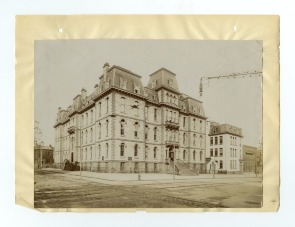 The History of the Philadelphia High School for Girls began as an institution by another name and in another location, The Model School. The Model School was established in 1818 by the Philadelphia School District Board of Controllers in order to train women to become teachers. A school was built on Darien Street and opened its doors to over 300 female students in February 1819.

After much lobbying by the Honorable James Campbell, a member of the Board of Controllers, in 1848 an addition institution for the education of young women, The Girls’ Normal School, was created. The school now was the first public secondary school for girls in the state, as well as the first municipally supported normal school in the nation. One hundred and nine students were present for the first instructional session on February first. The Normal Schools of the 1800s were the predecessor of state teacher colleges.

The student body continued to grow, leading to construction in 1854 of a larger school. Five years after the new school was built, in 1859, the name was changed to the Girls’ High School of Philadelphia. The school’s name was again changed the following year to The Girls’ High and Normal School, with the intention of providing more clarity about the mission of the institution as a school not only for training teachers, but also for broader academic work.

A new building was again slated for construction in 1876, a building which, “for convenience and comfort … probably [had] no superior.” The building now located at 17th and Spring Garden Streets was surpassed in size in the city only by Girard College and the University of Pennsylvania. The building was comprised for forty class rooms and included a 1200 seat auditorium for its 640 students.

In a publication put out by the school in 1889, the intention of the school is clearly outlined. It describes the mission of the school as one that provided an “education of all the faculties.” In which “The whole girl is put to school. She is trained mentally, physically, ethically, and is fitted to enter upon her life work without loss of time, and without error in the choice of occupation … train[ing] girls for womanhood.”

The High School and Normal School split into two separate institutions in 1893. This move officially allowed the Philadelphia High School for Girls to offer three distinct academic curriculums in the fields of liberal arts, classical studies, and business. In 1898, it added a medical school preparatory course.

A proposed combination of the high school with William Penn High School was resisted in 1930, reinvigorating the identity of the school. By 1933 a new building was erected, replacing the school that had served the site at 17th and Spring Garden Streets since 1876. A final move to the schools current location at Broad and Olney occurred in 1958. The 1933 building on Spring Garden is now home to the Julia R. Masterman Laboratory School.

The school currently prides itself as an institution of “outstanding academic opportunity” and hosts a myriad of extracurricular in the realms of art, athletics, and academics.