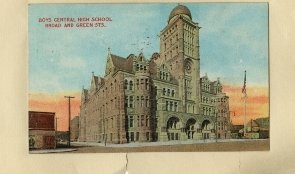 The Central High School of Philadelphia is the only high school in the country to have the privilege of awarding its student a college level degree. The school, the second public high school in the country, began in 1838 as an all boys school with only four teachers and sixty-thee students. It was granted the unique ability to award its graduates with Bachelor of Arts degrees in 1849 by an Act of Assembly.

The school relocated from its original home, the site which the Wanamaker building stands on today, to its second home at the intersection of Broad and Green streets in 1900 The size and cost of the new school garnered national attention, to the point that then president of the United States Theodore Roosevelt addressed the student body at the building’s dedication. Roosevelt began his address to the students with “Boys, it is perfectly easy to see from my reception that you feel happy over the football game yesterday.” The students cheered in response, as they were indeed excited over their 23-0 victory against Central Manual Training School.

Due to an expanding student body, the school renovated and expanded its facilities an additional time in 1939, before settling at its current home at the intersection of Olney and Ogontz Avenues. In the summer of 1983 federal judge William M. Marutani ruled that Central’s status as an all boys school as unconstitutional. The September after Judge Marutani’s ruling, the school welcomed its first female students (a total of six senior girls.) Now the school student body is comprise of approximately 50% young women.

Central High School currently operates as a magnet school within the Public School District of Philadelphia with a total of over 2300 students and 110 teachers. The school is continually recognized for its superb tradition of academic excellence by the city and nation as a National Blue Ribbon School and a “school of national excellence” at both the federal and state levels.