The Gen. George A. McCall School 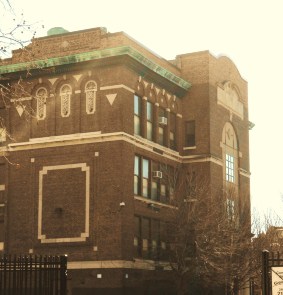 The General George A. McCall Elementary School, which first opened its doors to students in 1911, prides itself on its long history of educational diversity. In the early 1900s, it pioneered vocational education and in the 1950’s, it enacted a unique program teaching English as a second language to children from the all over the greater Philadelphia area.

The first principal of the school was Louis Nusbaum, who had previously held in the same position at the Horace Binney School. The school was built to hold up to 1300 students. The new school aided in the efforts to relieve overcrowding at the Binney School and to accommodate growing center city populations as well.

In the 1920s and 1930s, Pennsylvania public school attendance was only required up until the age of 14, when students had the option of seeking employment while still attending classes once a week until the age of 16. This option was known as “Continuation School.” McCall’s Continuation School was well regarded throughout the city and taught its students a myriad of useful trades. Classes prepared young men and women for careers in the fields of carpentry, printing, metal working, electrical wiring, tailoring, auto mechanics, retail, business and banking, painting, plastering and paperhanging.

The McCall Continuation School education emphasized “inspiration not information” and provided six hours of academics to every two hours spent in the shop. Its students also put their labors towards good use by donating their creations to the Red Cross or local children’s charities and hospitals. During the Great Depression, McCall began to offer ‘Opportunity Classes” for young men between the ages of 16 and 21. Opportunity classes were given without credit or grades, a precursor to Vocation Training, and existed solely for the betterment of students in order to make them more appealing job applicants. Subjects taught included bookkeeping, typing, stenography, cost accounting and commercial law.

Beginning in the 1950s, McCall was the first public school in the nation to teach English to non-native speakers. The program thrived, and by 1953 the school had 200 students representing over 20 countries studying English. The program didn’t just teach the children how to read and write in English, but also aided in their assimilation by teaching them American customs. The school was referred to as “a mini United Nations” and boasted welcome signs that could be read in 14 distinct languages.

When many of the wealthy residents of the Society Hill neighborhood, where the school is located, began to send their children to private schools, McCall’s continued to grow and thrive. The school expanded in the mid-1960’s with the addition of a gym and auditorium.

The Gen. George A. McCall School has retained its reputation as an exceptional public school, and continues to serve the communities of Society Hill, Washington Square West, Old City, and Chinatown.

For your enjoyment, a selection of jokes from the McCall Continuation School’s Blue and Gray Graduation and Sports Number 1924:

Have you a room with running water? We did have, but we replaced the roof last fall.

Mother, won’t you give me a nickel for a man who is crying outside?

Yes dear, there it is. You are a good boy to think of the poor man, what is he crying about?

Where is Brown Street? The same place it was yesterday.

Can you tell me which skins are best for shoes? Can’t say, But banana skins make the best slippers.

What age is best enjoyed at breakfast? Sausage.